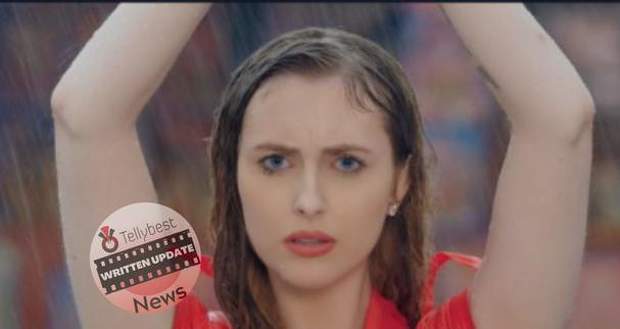 He tells Emily he has come to help her since she helped the baby selflessly without thinking about her Tapas.

Emly says she doesn’t feel accepted in her husband’s family and asks Lord Krishna to talk to Anandibaa personally.

However, Sri Krishna reminds Emly that only she can see him and no one else.

He then asks her to go back to Sanghani House with love in her heart and see the magic unfold.

Meanwhile, Aarav worries for Emly and tells Anandibaa she did not do well sending Emly alone on the streets.

As soon as Aarav says this, Emly returns back with a lady carrying the cooking competition award.

The lady informs Anandibaa that they found Emly’s Halwa hidden under the table which was replaced by someone else.

After tasting Emly’s dish, the judges declared her the winner.

Emily gets happy and asks Baa if she can enter the kitchen now.

Meanwhile, Aarav goes to a vegetable seller’s shop and starts chopping all his vegetables in anger.

Chaman grabs the vegetable seller by his shoulders and says if he doesn’t let Aarav chop all these vegetables, his head would go off.

On the other hand, Gunjan also boils in anger and brings a boxing bag to take her irritation out.

Pinky makes fun of Gunjan but Gunjan hits Pinky back with the boxing bag.

The next day, Emly celebrates her entry into the kitchen by dancing while Gunjan keeps making ugly faces in the back.

After dancing, Emly asks Anandibaa if she is happy to let Emly enter the Sanghani kitchen.

At night, Anandi baa dreams of Emly cooking American dishes like Pizza, Burger, and Noodles for everyone but not asking Baa what she wants to eat.

In her dream, Baa asks Gunjan if she has also changed.

Gunjan says she is now a modern Bahu while Anandibaa asks for an Indian item to eat like ‘Roti’.

Baa wakes up with a scream, making Gunjan rush to her aid.

Anandibaa then says she is scared to let Emly enter her kitchen since she has not heard of any American Annapurna (daughter-in-law who is in charge of cooking).

Gunjan plays a double card and says even she is not happy to see Emly get entry into the kitchen.

© Copyright tellybest.com, 2020, 2021. All Rights Reserved. Unauthorized use and/or duplication of any material from tellybest.com without written permission is strictly prohibited.
Cached Saved on: Saturday 1st of October 2022 10:30:23 PM