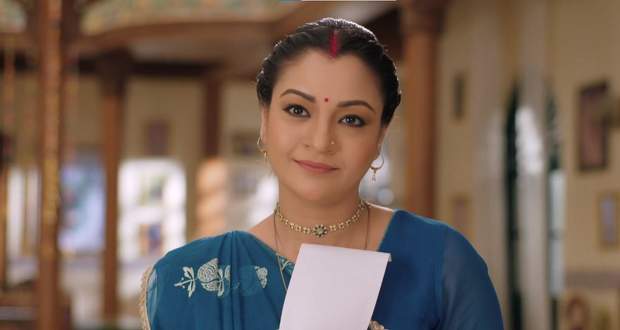 Today's Anandi Baa Aur Emily 5th August 2022 episode starts with Pinky watching a couple get all romantic from her balcony.

Just then Gunjan joins Pinky and shows her Jaibala’s train ticket that she stole from her purse.

However, Pinky thinks Gunjan wants to send her back home and starts crying.

Gunjan gets irritated and tells Pinky she doesn’t want to slap her and ruin the romantic mood of the couple.

Gunjan reveals how she will push Emily into a mess in front of Jaibala in the Muh-Dikhai (Face revealing) ceremony and spill her secret of being a white Bahu in front of her.

Pinky teases Gunjan for her master plan, calling her a clever fox.

Jaibala says she lost her train ticket and then called her daughter to send her the E-ticket but by the time she sent it, the train took off so she came back.

Gunjan grins at the back while Anandiba goes to Aarav and Emily’s room and asks Emily to cover her face since Jaibala is back.

Later, Aarav, Pinky, Gunjan, and Anandiba hold a meeting to look for a solution to fool Jaibala so Anandiba does not lose the president seat of her group.

Gunjan says they can ask Emily to put on a black wig to look Indian, but Aarav says Emily will never put on a wig.

Before the Muh-Dikhai ceremony, Gunjan tells Emily that Aarav and she will dress her up and casually shows Emily a black wig with a long ponytail.

Emily says she does not want to wear but Gunjan hypes her up falsely, saying if Emily wants to look like a true Indian woman, she has to wear it.

Downstairs when Gunjan walks Emily with the veil on her face, Jaibala notices how long Emily’s ponytail is and questions Anandiba how come she did not notice it before.

Later, the Muh-Dikhai ceremony commences and Emily’s face is first seen by Jaibala but after she sees her, Jaibala becomes inquisitive.

© Copyright tellybest.com, 2022, 2023. All Rights Reserved. Unauthorized use and/or duplication of any material from tellybest.com without written permission is strictly prohibited.
Cached Saved on: Friday 27th of January 2023 09:46:55 AMCached Disp on: Thursday 9th of February 2023 07:29:34 AM