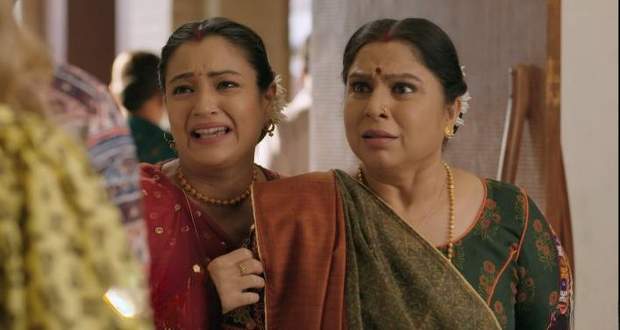 Today's Anandi Baa Aur Emily 7th July 2022 episode starts with Emily telling Aarav that she wants to stay in India for her life.

At the same time, Gunjan arrives there and gives Emily the signed NOC.

Seeing this, Emily tries to say "Bohot bohot sukrabar" (Thank you) much to Gunjan’s irritation.

While Emly is busy checking her documents, Gunjan starts interrogating Aarav about his and Emily’s friendship.

However, Aarav quickly denies his liking for Emily, instead, he says that Emly is just an American ticket for him.

He then takes Emily to where Chaman is catering.

At the same time, Aarav returns with Chaman and drags Emily to the dance floor to perform.

Meanwhile, in Aarav’s house, Gunjan tells her sister Pinki that she needs to do something otherwise Emily and Aarav’s love will shine on Gondol’s sky.

However, dumb Pinki tells Gunjan that she has called him to come.

Hearing this, Gunjan gets upset but before she can react Shanti enters her room.

When Gunjan looks at Pinki with confusion, Pinki explains that she knows Gunjan wants to make something for her and she needs shanti (peace) in her life so she asked Shanti, the grocery seller to come to their home.

After Shanti leaves, Gunjan begs Pinki to stop being stupid.

The next morning, a couple comes to their home to ask for Anandi Baa’s favor to register their nephew’s marriage.

Hearing this, on one hand, Gunjan tells Araav that he does not need to tell the lawyer about his intention of coming only Anandi Baa’s name, and on the other hand, Gunjan’s husband tells the couple the same thing.

Later in court, Emily and Aarav meet with the wrong lawyer and go for marriage registration.

On the other hand, Gunjan’s lawyer takes the couple for land registration.

In the courtroom, when the lawyer asks Aarav for his documents, he gets confused but gives them anyway.

At the same time, another lawyer asks the couple for information about their land much to their confusion.

The confused man calls Gunjan and then she gets that Araav and Emily are with the wrong lawyer.

After that, the lawyer congratulates them as Mr. and Mrs. Sanghani.

At the same time, worried Anandi Baa arrives there with Gunjan.

© Copyright tellybest.com, 2022, 2023. All Rights Reserved. Unauthorized use and/or duplication of any material from tellybest.com without written permission is strictly prohibited.
Cached Saved on: Friday 27th of January 2023 09:31:12 AMCached Disp on: Thursday 9th of February 2023 08:30:07 AM