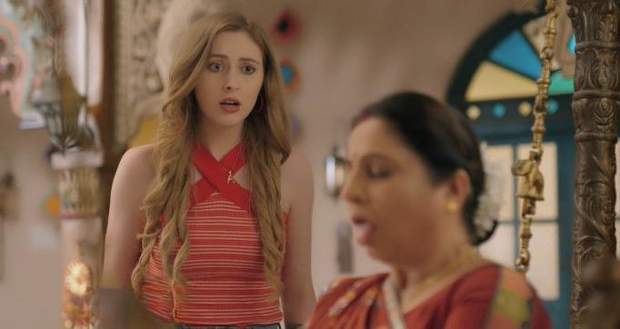 Anandibaa refuses but Nandoi Ji forces her to hit but she doesn’t.

Meanwhile, Gunjan goes to the terrace and asks Emily to go downstairs since Baa is calling her.

Emily gets happy after Gunjan tells her that Baa was asking about her.

However, it is just a lie to trap Emily into believing that Anandibaa has asthma.

Anandibaa has started two hundred rounds of her breathing kriya and when Emily sees this, she gets worried and remembers Gunjan’s conversation with Pinky.

Emily wastes no time in running to the kitchen and grabbing the white powder kept in front of the fridge.

However, Emily grabs a spoonful of the white powder and forcefully feeds it to Anandi.

Anandi spits it out and screams at Emily if she is in the right frame of mind.

Gunjan and Pinky secretly watch this from the stairs and get happy.

However, Anandi asks Emily who told her that she has asthma, and Emily points toward Gunjan.

Gunjan laughs nervously and says Emily must have misunderstood her since she was talking about her own mother.

This makes Anandibaa tell Emily to leave Gondal and this house and return back to America.

Meanwhile, Aarav is not sad about Baa’s decision and prepares his suitcase to go to America with Emily.

However, his VISA application does not get approved and he rushes to somehow ask Anandibaa to stop Emily from going.

Kanchan cries a little when it is time for Emily to leave and says she will miss their “De Dana Dan” washing of clothes.

However, Aarav comes just in time and justifies Emily’s action by saying Emily had good intentions of saving Baa, that is why she did not hesitate to enter the kitchen.

However, she tells Aarav she will not talk to firangan Emily.

© Copyright tellybest.com, 2022, 2023. All Rights Reserved. Unauthorized use and/or duplication of any material from tellybest.com without written permission is strictly prohibited.
Cached Saved on: Monday 21st of November 2022 04:57:24 PMCached Disp on: Thursday 8th of December 2022 02:34:16 AM