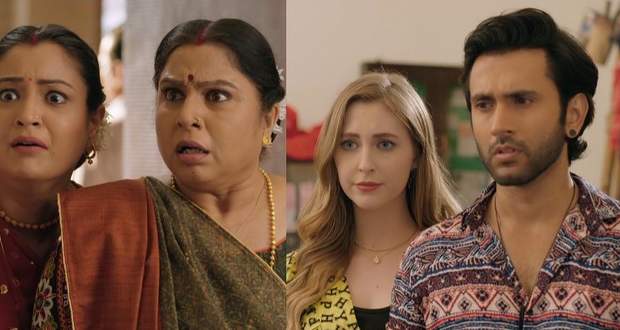 Baa tells Gunjan that she never thought that Pinki would love her family this much.

While walking, Gunjan tells Baa that before the firangi (American) crosses the gate of Aarav’s heart, they need to make Aarav’s marriage happen sooner.

Elsewhere, Aarav and Emily discuss their failed marriage and dreams.

Later, emotional Anandi Baa tells Aarav that he will go to America on his honeymoon after getting married.

She then says that she was blind for not seeing the girl in front of her.

Thinking about Emily, Aarav promises Baa that he will get engaged.

Much to Aarav’s shock, Anandi Baa calls Pinki for the engagement.

After telling everyone about the ancestral ring, Baa arrogantly asks Emly to come close.

Gunjan tries to warn Baa about nature's conspiracy to unite Aarav and Emly but she ignores it.

While walking, Emily slips on the ghee and crashes with Aarav.

They both land on the couch and he somehow slips the ring on Emly’s finger.

Baa then orders Emily to take the ring off.

When Baa urges her to say positive, she repeats the same thing but in a cheerful voice.

While Baa asks Kanchan to take the ring off, Gulab says that as per Parimal baba they need to feed cow two chapatis daily for this.

At the same time, Gunjan gets hyped up and starts acting like a loud girl much to everyone’s shock.

However, she controls herself and innocently asks Baa’s permission for it.

The ring-taking mission quickly turns into a tug of war between Emily vs Gunjan and Anandi Baa.

Seeing Gunjan moving in circles, Gulab comments that this new firangi girl has made Gunjan dance at her fingertips.

At the same time, Gunjan asks Pinki to bring an oil jar but dumb Pinki returns with an empty jar much to everyone’s shock.

After a lot of struggle, Emly finally takes the ring off and asks Baa if she can give her “jahar" implying permission for NOC.

While Baa orders Gunjan to purify the ring, Aarav asks pandit ji for help to stop the marriage.

At the same time, Pinki video calls Aarav to show him some ideas about marriage.

Elsewhere, Emily tells Mridula about everything on the video call.

© Copyright tellybest.com, 2022, 2023. All Rights Reserved. Unauthorized use and/or duplication of any material from tellybest.com without written permission is strictly prohibited.
Cached Saved on: Wednesday 25th of January 2023 02:41:59 PMCached Disp on: Thursday 9th of February 2023 08:18:07 AM