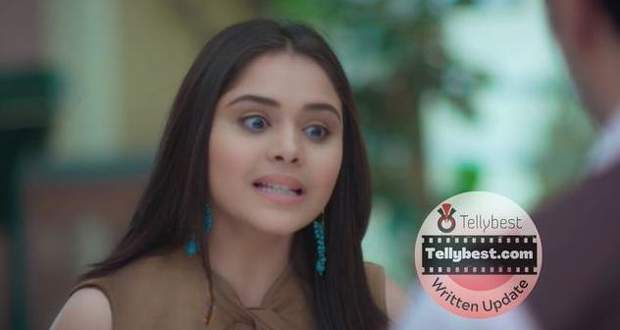 Today's Anupama 10th December 2022 episode starts with Leela telling Samar that he has to do what she tells him this time which annoys Samar drastically.

Samar asks Leela why her radar always gets stuck in his marriage while Pakhi comes out and asks everyone why a new argument is going on.

Samar leaves the house in a hurry and bumps into Pakhi, making her phone fall to the floor, turning on the speaker of Adhik’s call.

Adhik asks Pakhi in a frustrated tone why she did not wash the dishes as she was supposed to, which brought cockroaches and mice into the house.

Adhik tells Pakhi how the mice destroyed his important files and asks Pakhi why she is even married to him if she cannot do this much.

Everyone hears Adhik in silence while he asks Pakhi why she even married him if she wanted to live in her father’s house all her life.

Adhik says that he has changed his entire lifestyle for Pakhi while she cannot make small adjustments for him.

Reminding Pakhi that he is doing everything for her as he loves her immensely, Adhik asks why he should be the only one to make an effort.

Adhik tells Pakhi to stay at her father’s house and enjoy her life to the full extent if that is what she wants to do.

As Adhik cuts the call, Vanraj stands up asking how dare Adhik say those words to Pakhi in such a rude tone.

Vanraj walks off saying that he is going to talk with Adhik but Kavya and Hasmukh stop him.

Kavya tells Vanraj that he should not speak about the matters between husband and wife and says that it is Pakhi’s mistake in this case.

Vanraj says that Adhik has no right to talk like that to his wife just because she did not wash some dishes.

Pakhi comes to Vanraj and tells him that Anupama is the one who is instigating Adhik against her by talking bad.

Hasmukh asks Pakhi to shut up and says that no one has the right to interrupt matters between a husband-wife.

As Vanraj says that Adhik is not a good husband, Hasmukh reminds Vanraj how he was in the past.

Vanraj says that he wants to protect his daughter and goes to Adhik’s house to confront him while the family members watch him anxiously.

After going inside, Vanraj straightforwardly comes to the point and asks Adhik how he can talk to Pakhi so rudely.

Adhik says that Vanraj is looking at the story from one perspective and does not know how frustrated and angry he has been feeling for the past few days.

Vanraj tells Adhik that Pakhi does not have the habit of washing dishes and doing household chores.

Adhik replies that he also lived in America and does not have the habit of doing these things but he is changing himself and taking on his responsibilities.

As Adhik reminds Vanraj how he used to act with Anupama, Pakhi comes and asks Adhik not to talk like that with Vanraj.

Adhik tells Vanraj that he expects equal efforts from Pakhi in the same way he is changing himself for her sake.

As Pakhi calls Adhik a male chauvinist person, Adhik asks Vanraj if he can wash Kavya’s dishes and clothes for two days which enrages Vanraj.

Meanwhile, Anupama tells Anuj to focus on his business and tries to call Adhik but he does not pick up.

© Copyright tellybest.com, 2022, 2023. All Rights Reserved. Unauthorized use and/or duplication of any material from tellybest.com without written permission is strictly prohibited.
Cached Saved on: Wednesday 25th of January 2023 09:43:35 AMCached Disp on: Thursday 9th of February 2023 05:52:40 AM