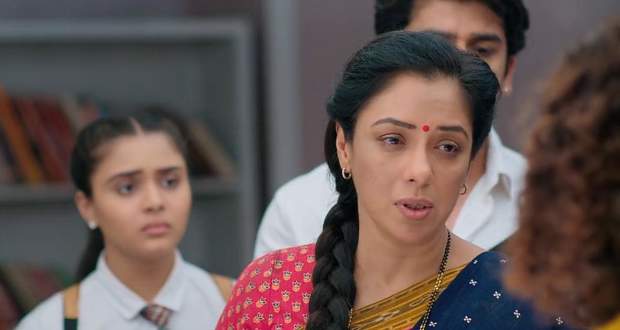 Today's Anupama 10 February 2021 episode starts with Anupama asking what happened to her hands while Samar tells her that she got her hands burnt a little.

Anupama tells them to remove the bandages and talks about the works she has to do while a principal comes there and tells her to not give any statements and to go home.

Anupama tells her that she told the teacher to not give her a gas strip and give her an electric stove and goes.

Anupama reaches home amd Leela checks her for any injuries and praises her while others also praise her.

Everyone goes while Vanraj tells Hasmukh that she suspects that the school will put the blame on Anupama for the fire incident.

Later, Samar cries to Anupama that he is a coward as he didn't come to help her while she consoles him.

Pakhi comes there and helps her drink the turmeric milk while Anupama says that the administration should be punished.

The principal comes to her home while everyone suspects why she is here.

Anupama tries to tell her how the incident happened while the principal tells her that she knows everything.

She says that Anupama is the one at fault while Anupama questions her how.

The principal says that she will have to give in written that she is at fault to save her job and her daughter's admission.

Anupama says her fault is that she couldn't stop the kids but the rest is the administration's fault.

However, the principal tells her that these are the seniors and trustee's orders and if she does not follow them then she will be fired and as well as her daughter will be outed from school.

She also tries to bribe her saying that she will double her salary and will get her a one month leave.

Leela tells her to accept the offer and subtly insults Anupama for putting Pakhi's education at risk.

Upcoming Anupama episode update: Pakhi gets Anupama's thumprint on school documents against her will.

© Copyright tellybest.com, 2020, 2021. All Rights Reserved. Unauthorized use and/or duplication of any material from tellybest.com without written permission is strictly prohibited.
Cached Saved on: Tuesday 2nd of March 2021 06:57:07 AMCached Disp on: Wednesday 3rd of March 2021 10:39:54 AM