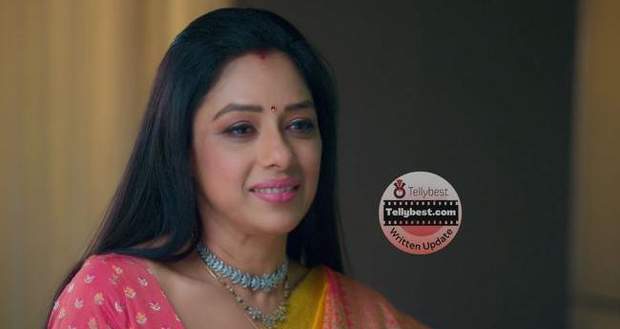 However, Anuj refuses as he says that he does not want to add guilt to Anupama by being in her presence.

Dheeraj tells Anuj to speak his heart out and Anuj reveals everything to him while telling him that he might have overreacted.

Anuj says that he fell in love with Anupama cause of her qualities which seem like her weaknesses now.

On the other hand, Anupama cries as she lays on her bed and looks at the petal crushed under her hand.

Meanwhile, at the Shah house, Vanraj keeps worrying about Kavya when she comes there in a car with some men.

She greets them goodbye while the whole colony watches her gawkily including Vanraj.

Kavya apologizes to Vanraj for being late and he leaves without uttering a single word.

Elsewhere, Samar sees the serious face of Dimple and tells her that he only said that he likes her and she shouldn't get uncomfortable.

Samar laughs as he tries to lighten the atmosphere and tells Dimple that both he and his mother speak their heart without thinking.

Back at the Shah house, Vanraj closes the door seeing people gathering to see the drama while Kavya keeps talking about her day at her new modeling job.

She gushes about getting compliments and getting tons of pictures from the set while Vanraj ignores everything and asks her about the people who dropped her off.

Kavya tells him that they were her team members while Vanraj argues that she should have called him or booked a cab.

However, Kavya gets affected and starts addressing Vanraj as Vanraj instead of V which he also notices.

On the other hand, Anuj vents to Dheeraj that he knows he is the one who has instilled the fear of going away from Anupama in her and made her feel guilty.

He gets frustrated as he tells Dheeraj that he knows he is doing something wrong but does not know what.

Meanwhile, inside the room, Anupama taunts herself for embarrassing Anuj in front of Dheeraj and sobs hysterically.

Dheeraj tells Anuj that the problem is perfection and explains to Anuj that they are trying to become the perfect couple which has made them astray from their love.

Dheeraj explains that a mother can never disown their children and tells Anuj that he is in the wrong for expecting Anupama to let go of her children and the Shah house so easily.

Further, Dheeraj gets emotional as he tells Anuj that he should not make the same mistake as him and let go of his love for Anupama so much that he can never get it back.

Anuj notices the shift of tone in Dheeraj's voice and asks him what he means while Dheeraj breaks down saying that Priyanka is no more.

At the same time, Anupama kisses the pictures of her family in the room and cries as she holds them tight and says that she will do everything to make sure that Anuj and Anu do not leave her.

On the other hand, Leela sits with Vanraj and tells him that she knows even he doesn't like Kavya's modelling and coming home late.

Leela tells him that he may be okay with it at first but when it becomes a routine, even he will not be able to control himself.

Vanraj argues that he cannot say anything since Kavya lost such a good job opportunity because of him while Leela telling that the decision is his and leaves.

Dheeraj tells Anuj how he forgot his Priyanka in saving his father's company.

He tells Anuj how because of his ego he did not even go to see Priyanka when she left him and how guilty he felt when he found out that she was in the last stage of cancer.

© Copyright tellybest.com, 2022, 2023. All Rights Reserved. Unauthorized use and/or duplication of any material from tellybest.com without written permission is strictly prohibited.
Cached Saved on: Wednesday 25th of January 2023 12:16:02 PMCached Disp on: Tuesday 31st of January 2023 06:17:34 PM