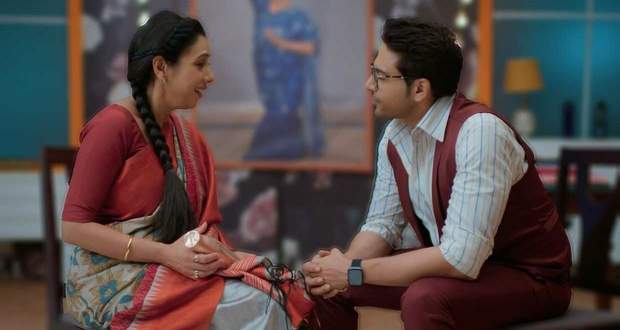 Today's Anupama 10th March 2022 episode starts with Anupama and Kinjal returning to the Shah house after meeting up with the doctor.

Rakhi welcomes her daughter and tells them how boredom while waiting made her play table tennis with Vanraj.

On Rakhi asking Kinjal why she went to see a local doctor, Kinjal conveys that she is not comfortable with male doctors.

Leela supports Kinjal in her statement which eventually leads to a catfight between her and Rakhi.

Rakhi suddenly gets emotional and expresses her concern and eagerness to do something for her daughter and grandchild.

Anupama welcomes Rakhi to do whatever she wants and announces about the complication matter in pregnancy on being asked.

After the members relax altogether, Anupama hurriedly leaves for her house as Anuj will be still waiting for her.

On reaching the house, Anupama sees Anuj drowning in sleep while the dinner is left untouched on the table.

Anuj wakes up and jokingly comments to make him wait that his life gets worthless.

However, Anupama bursts into tears letting her emotions flow freely through her tears making Anuj panic.

Showering Anuj with sorry, Anupama continues to sob while telling Anuj how she is making him wait day by day.

Anupama tells Anuj that she feels like taking him for granted as she knows that Anuj will understand the situation no matter what.

Seeing Anupama so concerned, Anuj becomes transparent about his feeling and tells her that being with her family in all situations is what makes her Anupama.

Anuj says that the more she stands beside her family portraying her love for them, the more he falls in love with her.

He wishes that Anupama never changes herself as he loved that simpleton girl who devoted herself to others’ happiness.

Anuj and Anupama’s dinner gets interrupted by Vanraj’s call who asks Anupama to come over quickly as something has happened to Kinjal.

Smiling with sincerity, Anuj takes Anupama with some food packed with him and tells him that they are having a rickshaw ride date.

On reaching the Shah residence, Anupama rushes inside while Anuj leaves.

Kinjal cries in anxiety due to pain in her stomach which Anupama handles somehow.

Seeing Kinjal wail in pain, Toshu gets nervous in worry and reconsiders Anupama and Samar’s words.