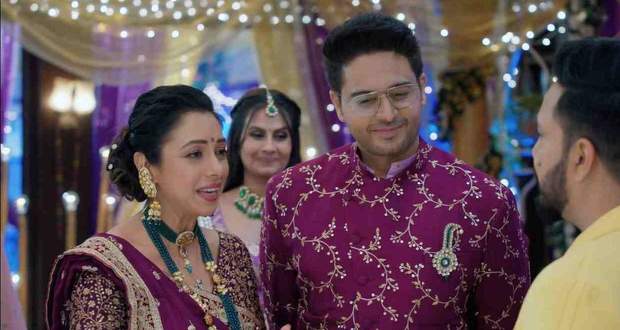 Today's Anupama 10th May 2022 episode starts with Rakhi opening Hasmukh’s reports and keeping them back after taking them as a regular report of an old man.

Anupama gets concerned about Anuj and Vanraj leaving together and gawns on that nervousness continuously.

Just then, Devika reads out Anuj’s message that he and Vanraj have gone to talk something with each other and will be back in sometime.

Hearing this, Anupama calms down a bit and patiently waits for Anuj’s return.

Meanwhile, Vanraj tells Anuj that he is tormented by the thought of getting separated from his children as Anuj is becoming their father.

Vanraj asks Anuj not to take over the position of their father as he will not share his children with anyone in any circumstances.

Anuj assures Vanraj that he will be their buddy, friend, and guide but will not take over as their father ever.

Being empathetic towards Vanraj, Anuj tells him that he will not break his promise until and unless Vanraj crosses the line and hurts Anupama.

Anuj clearly warns Vanraj that if he denies Anupama any rights as a mother then he will snatch away his children at that instant from him.

Later, Anuj and Vanraj return to the house and the function resumes after Anuj assures everyone that everything is alright.

Anupama and Anuj talk with each other aside and reassure that Anuj is alright after conversing with Vanraj.

The sangeet starts officially with Samar and Malvika announcing that they are going to re-enact the love story of Anuj and Anupama if Anuj had confessed 27 years before.

Anuj and Anupama dance happily as lovers on ’90s classics to show the passion and love they hold together.

Meanwhile, Hasmukh feels dizzy and takes his medicines to avoid any casualties in the middle of the function.