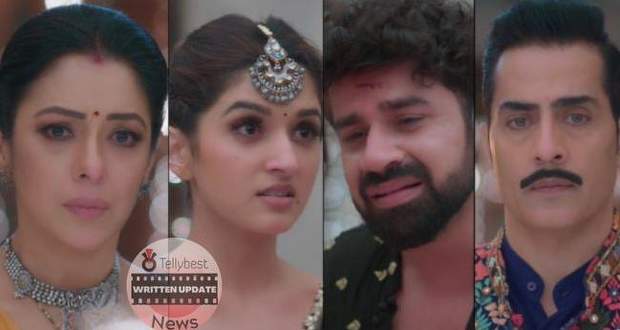 Today's Anupama 10th October 2022 episode starts with Vanraj checking on Anupama and making sure she is fine after all the drama that took place outside.

As Vanraj talks about Kinjal giving Toshu a second chance, Anupama makes it clear that Kinjal has not decided to resume her relationship with Toshu.

Kinjal has given a second chance to Pari’s father but has not forgiven her husband who cheated on her.

Later, when Anupama returns home, she notices a letter by Anuj and a pillow kept on the table and proceeds to read it.

Anuj tells Anupama in the letter that sometimes rather than being comforted by a loved one, a person needs to fret their anger out in some way.

Anuj asks Anupama to scream into the pillow to her heart’s extent and tear it off while expressing all the frustration and anger she has been bottling up inside her.

Anupama follows Anuj’s advice and begins to scream and tear the pillow while remembering the pain she had to go through in the past few days.

Seeing Anupama screaming and crying violently, Anuj stands silently in a corner giving her time to be with herself in her private space.

After some time, Anuj walks to Anupama and engulfs her in a hug while Anupama takes shelter on his lap.

Meanwhile, Samar, Pakhi, and Toshu have a talk with each other after a long time and Samar tells Toshu about his anger issues.

Anuj tells Anupama about discussing Toshu’s hyper condition with Devika and discovering a wellness center that deals with issues like that.

Later at night, Vanraj seems restless about Kinjal and Pari’s condition and wakes up to check on them but Kavya stops him.

Asking Vanraj to calm down for a bit, Kavya assures him that Toshu is composed now and will not do anything to anyone.

Vanraj and Kavya pray together that they all can spend a happy Dussehra with each other.

The next day, Leela and Hasmukh talk about Kinjal’s decision and Samar’s marriage as Hasmukh asks Leela not to rush with Samar’s wedding.

Anupama arrives just then and asks Leela not to finalize things by herself without informing her or Samar.

After Anuj and Anu also come, Anupama greets everyone along with Toshu and asks him about going to the wellness center.

Toshu agrees to go for treatment and leaves after the Satyanarayan puja gets over.

As Toshu hugs Pari dearly in his arms before leaving, he promises Kinjal that he will genuinely try to make himself a better person for the sake of his family.

© Copyright tellybest.com, 2022, 2023. All Rights Reserved. Unauthorized use and/or duplication of any material from tellybest.com without written permission is strictly prohibited.
Cached Saved on: Monday 21st of November 2022 05:50:29 AMCached Disp on: Friday 9th of December 2022 05:09:19 AM