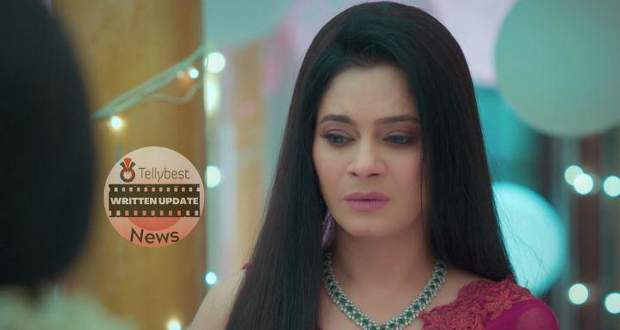 Suddenly Anuj comes and gifts her a bracelet of Dadi. He also apologizes to her as he lost his calm before.

Anupama tells him she had forgiven him already and that this happens with humans. She also tells him to not apologize on this special day.

Meanwhile, in the Shah house, Leela is waiting for Anupama while Toshu messages Rakhi to forget everything and start anew.

Suddenly Rakhi begins taunting Anupama that she had told her to come early when Anuj announces that she is here.

Anuj states that only he knows how fast Anupama worked to get here as soon as possible.

Later, Vanraj hands him the baby and Anuj says the baby feels like a bundle of joy.

Suddenly Barkha and her family also come making Leela look at that them coldly.

Pakhi smiles at Adhik and the ceremony begins.

Barkha notices Rakhi is not that happy today and goes to her to taunt her while Rakhi comes back with an insult that she knows very well about their status in the Kapadia mansion and silences Barkha.

The naming ceremony begins and Anupama tells the parents of the baby to light a lamp and put a notebook and pen beside the baby.

The rituals are being performed beautifully in the Shah house when Anupama pampers the baby in her cot.

Choti Anu comes to click the baby’s picture but Anupama stops her to do anything so fast because the camera might fall.

Barkha notices it and uses this opportunity to make Choti Anu on her side.

She tells Anu to not worry Anupama and go to her dad which Anu follows.

Barkha also tells Anu that her mother is worried that she’ll hurt the baby that’s why she stopped her.

Anuj makes Anu understand that this is nothing like that while Barkha comes up with another statement.

She says that she knows when Anupama gives time to her granddaughter, Choti feels sad about her attention.

Anuj glares at Barkha for her false manipulations to create misunderstandings within Choti but suddenly Anupama calls Choti to click photos and have fun.

Following this, everyone gets ready with their name list for the baby.

Rakhi’s list falls on the notebook kept for the baby and Paritosh picks it up to see it.

Rakhi snitches the list from his hand rather rudely making everyone shocked.