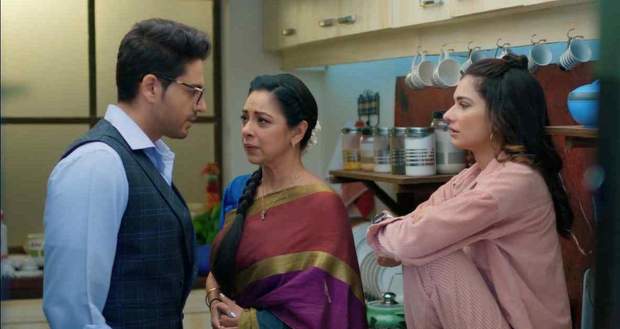 Today's Anupama 11th April 2022 episode starts with Malvika apologizing to Anupama for doubting her motives and hugging her to ease her worries regarding the Shah family.

Anupama comes to Anuj to say sorry for earlier but Anuj acts grumpy in a cute manner that endears Anupama’s heart.

As Anuj tries to walk off from there, Anupama pushes him to the wall and traps him on both sides with her hands.

Anupama blushes and tells Anuj that he looks very adorable while acting grumpy which makes Anuj happy like a little child.

Stopping Anupama by holding onto her saree, Anuj declares that he will love Anupama in front of everyone now.

Meanwhile, Rakhi asks Kavya to take a call on her suggestion and says that she is helping Kavya only because she is a woman.

Later, Anupama, Samar, and Kinjal arrive at the Shah’s house and see Vanraj and Kavya fighting like dogs and cats.

Anupama tries to interfere but gets shunned by Vanraj, Samar and Kinjal try to make Anupama understand that she does not require to get engaged in these affairs.

The next morning, Anupama dreams about Anuj in a groom’s attire and gets excited herself on thinking of seeing that in reality.

Hasmukh sits with Vanraj and tries to teach him the good values that are required to be successful.

Vanraj gets a bit emotional on seeing his father talking tenderly to him and listens to him in silence.

Later, Leela spots Hasmukh getting rejected by every relative about attending Anupama’s wedding and rubs salt on Hasmukh’s wounds.

Leela announces that no one including herself will attend “Dadi Ki Shaadi” which makes Hasmukh upset in many ways.