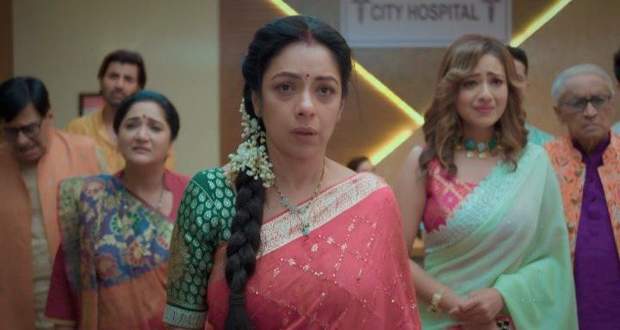 Today's Anupama 11th August 2022 episode starts with Vanraj and Anuj having been sent to the ICU ward by the physicians since they are in severe condition.

Anu makes Anuj and Vanraj pledge to never argue again while imagining Anuj kissing her forehead and Vanraj smiling alongside her.

Anu becomes restless after understanding it was all in her head and asks Pakhi to see Anupama.

Both women are devastated and sob uncontrollably as they watch the love of their lives being treated in the intensive care unit.

One by one, everyone recalls their experiences with Anuj and Vanraj.

Samar discusses how status has no meaning in hospitals and is meaningless because patients are just that - patients.

Anupama believes that despite Vanraj and Anuj's differences, they both appear the same and are fumbling against death, which crushes her heart.

The doctor soon breaks the devastating news to everyone that Anuj and Vanraj's condition is getting worse and that their response over the next 48 hours will be vital.

Meanwhile, Kavya, who is in despair, describes how angry Vanraj was the night before the accident when she saw Anuj and Vanraj together and decided to follow them.

Kavya makes the hasty decision to approach them in order to stop them both from chatting at the cliff's brink.

Her saree became tangled in the crops, and by the time she was able to free it, Anuj and Vanraj vanished.

She breaks down in tears and admits to everyone there that she has no idea what exactly occurred to have caused their current state.

Ankush explodes in anger since he had been trying to get Kavya to tell what she had seen from the beginning.

Ankush accuses Vanraj of everything because he threatened Anuj, but Toshu, Baa, and even Samar stand up for Vanraj.

Vanraj, they all agree, has anger management problems, yet he cannot kill someone.

When Samar and Toshu get into a furious disagreement about defending Vanraj's reputation, Ankush and Adhik stand up for Anuj.

Anupama is horrified to witness everyone fighting in the same hospital where Anuj and Vanraj are battling for their lives.

She orders everyone to cease making up stories, and she requests that Kavya provide the police with her statement.

Anupama asks that instead of fighting, everyone pray for each other's well-being since she doesn't think Vanraj could ever do something like that.

She becomes emotional after hearing Anu's voice note, whilst Samar loses it and collapses into Anupama's arms.

Vanraj's response to the treatment is reported to everyone by the doctors, but Anuj is not. Upon learning this, Anupama freezes and becomes inebriated.

Anupama is comforted by Baa, who also advises her to stay strong since Anuj would soon reply.

Anupama experiences flashbacks from the past and yearns for Anuj.

© Copyright tellybest.com, 2020, 2021. All Rights Reserved. Unauthorized use and/or duplication of any material from tellybest.com without written permission is strictly prohibited.
Cached Saved on: Sunday 2nd of October 2022 12:22:33 AM