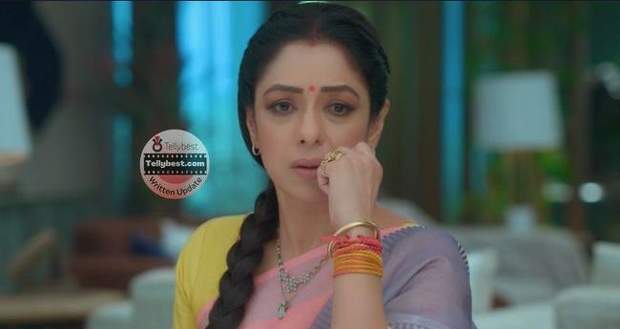 Today's Anupama 11th December 2022 episode starts with Adhik telling Vanraj about the daily events which make his life with Pakhi intolerable to bear.

Adhik says how Pakhi disturbs him in his meetings by making calls and gets angry when he does not pick them up.

Expressing his frustration after bearing Pakhi’s non-sensical behavior, Adhik says that he is fed up with dealing with Pakhi.

Vanraj asks Adhik to talk politely with Pakhi while Pakhi continues to shout at him for his words.

Adhik says that he could have gone to his sister and lived there but is trying to work hard day and night for the sake of Pakhi.

After Vanraj leaves the house with a warning to Adhik about maintaining peace with Pakhi, Adhik goes to bed to sleep.

However, Pakhi comes after Adhik and asks him to clear things up with her.

Adhik replies that he is extremely tired and needs to sleep to regain his composure.

As Pakhi continues to pull away the pillows from Adhik despite his resistance, she falls on the bed due to the pull and push.

Adhik quickly checks on Pakhi and asks her if she is all right but Pakhi pushes away Adhik forcefully and asks him to stand away.

Pakhi accuses Adhik of pushing her away, which he denies as he never intended to physically express his anger.

Despite Adhik trying to talk with Pakhi and clear things out, Pakhi starts to throw things at him that start to hurt him.

Pakhi throws away her cosmetics in anger that crashes to the ground resulting in the glass piercing Adhik’s face.

Adhik screams in pain while Pakhi stands in silence. Standing with fuming eyes, Adhik announces that he is done with her and their marriage and is leaving the house.

Adhik walks out of the house while Pakhi says that she does not care about what he does.

Meanwhile, Anupama and Anuj tell each other how they spent their entire day when Adhik enters the house with a bleeding face.

Adhik starts to cry while hugging Anuj making both Anuj and Anupama get worried about him.

On the other hand, Pakhi tells Vanraj about Adhik which makes him boil in anger and he swears to teach Adhik a lesson.

Adhik tells Anuj and Anupama that he is done with Pakhi and their marriage which makes Anupama anxious.

Kavya gives advice to Pakhi and tells her that she is losing her relationship just to fuel her ego which is a foolish decision.

Hasmukh expresses his concern regarding Anupama and Anuj’s relationship due to these daily clashes and fights within the family.

Adhik continues to cry in Barkha’s arms when Vanraj enters the house and stomps angrily toward Adhik.

Anuj and Anupama stop him from going near Adhik and tell them what has happened.