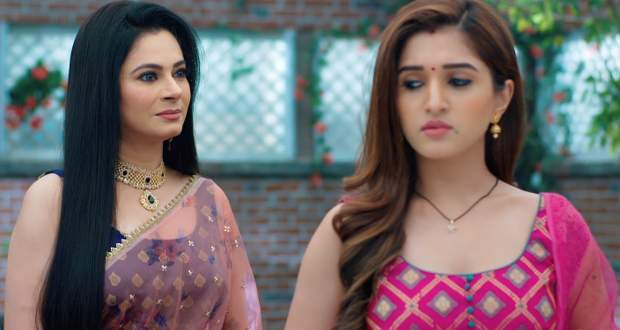 Today's Anupama 11 January 2021 episode starts with Rakhi wondering why Kavya and Vanraj didn’t come out of the room. Anupama taunts her and asks her to see for herself what they are doing.

Vanraj asks for some time from Kavya to think and make a decision. He says he needs time to think if he wants to get back together with Kavya or not.

Rakhi wants Kinjal to not worry about the situation as everyone thinks about themselves. Rakhi says Vanraj will not go anywhere while Kinjal gets irritated.

Kinjal supports Anupama’s decision while Rakhi warns her about Anupama forgiving Vanraj. Rakhi is sure Kinjal will realize her mistake of trusting Anupama.

Kavya is not able to contemplate what’s right and wrong and feels weak in love. She is ready to leave her pride for her love.

Kavya says she is in the same spot as Anupama and is ready to wait for him. Later, Anupama receives a glasshouse from Devika.

However, she bumps into Kavya and the house breaks into pieces. Kavya wants to know if she will rejoin the house while Anupama says there is nothing left to join.

She assures Kavya that she will never return to Vanraj and that she has moved on in her life. Later, Pakhi and Vanraj share some cute moments together.

Baa and Anupama witness the scene and get happy. Baa thinks Vanraj won’t go back to Kavya but Anupama ignores her comment.

Vanraj, Kavya, and Anupama get emotional thinking about their broken love lives. The next morning, Baa taunts Anupama for not being a strict mother-in-law.

Anupama wants to give time to Kinjal and gives milk and tea to Pakhi and Vanraj. She also gives coffee to Kinjal and Paritosh while Kinjal apologizes for being late.

Upcoming Anupama episode update: Vanraj falls down and Anupama gets worried for him.

© Copyright tellybest.com, 2020, 2021. All Rights Reserved. Unauthorized use and/or duplication of any material from tellybest.com without written permission is strictly prohibited.
Cached Saved on: Tuesday 2nd of March 2021 12:17:11 PMCached Disp on: Wednesday 3rd of March 2021 01:51:10 PM