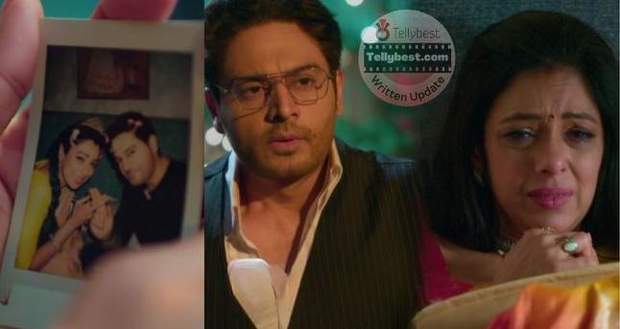 Today's Anupama 11th January 2023 episode starts with Dheeraj suggesting Anuj let go of his anger for once so that he realizes that he is hurting Anupama more than she deserves.

Anuj rethinks his past decisions and thanks Dheeraj for making him realize that what he was thinking was wrong in a way.

Dheeraj asks Anuj to run to Anupama, apologize to her for being so stiff, and not tell her about Priyanka.

Anuj comes into the bedroom running and asks Anupama to come to him with open arms.

Anupama flashes a smile and runs to Anuj enclosing herself in a hug with Anuj.

However, that turns out to be Anuj’s imagination as he spots Anupama sleeping with a photo of them in her hand.

Anuj keeps away the photo and lies beside Anupama on the bed silently as he does not want her to wake up.

Anupama hugs Anuj in the middle of her sleep and finds herself in Anuj’s arms the next morning.

Meanwhile, Paritosh talks about a deal on the phone regarding Mr. Sharma’s property which makes Vanraj and Hasmukh upset as they heard that the property has been under litigation for years.

Toshu assures them he is ready to take risks and will ensure everything goes right as that deal will give him a 30% commission rate.

Vanraj worries about Toshu’s overconfidence and fears that he will soon crash the business and the family.

As Anuj comes, Dheeraj acts foolishly and proposes that Anuj should not go to the office today but Anuj does not agree.

Dheeraj cuts Anuj’s tie to stop him from going to the office and says that he has planned a short trip for the three of them.

Anupama and Anuj meet each other’s eyes but do not talk to each other which irritates Dheeraj and he asks them to utter something.

Anupama requests Anuj to agree to go on the trip but Anuj remains stern on his decision about going to the office as he has an important meeting.

Just then, Devika arrives at the Kapadia mansion and hugs Anupama happily as the friends reunite with each other after a break.

Dheeraj seems to be interested in Devika and walks toward her to say hello but Devika completely ignores him and greets Anuj.

Dheeraj tags Devika as the CCF: Common College Friend and compliments her on her beautiful eyes.

Devika understands Dheeraj’s flirtatious intentions and replies that he seemed familiar to her as her milkman’s name is also Dheeraj.

On the other hand, Toshu searches for money everywhere when his eyes fall on Kinjal’s cupboard which has money in it.

Toshu takes the money without asking Kinjal and promises himself that he will return it soon.

Meanwhile, Kavya does her professional photoshoot with a photographer named Mohit and gets a shower of compliments regarding her fantastic looks.

Mohit comments on how he sees potential in Kavya which motivates Kavya to do better.

Coming back to Anupama, Dheeraj and Devika suggest a plan to Anupama but she refuses as she cannot do anything like that to Anuj.

However, as Devika and Dheeraj encourage Anupama to take a big step, Anupama agrees to go according to their plan.

© Copyright tellybest.com, 2022, 2023. All Rights Reserved. Unauthorized use and/or duplication of any material from tellybest.com without written permission is strictly prohibited.
Cached Saved on: Wednesday 25th of January 2023 09:05:03 AMCached Disp on: Monday 6th of February 2023 05:01:11 AM