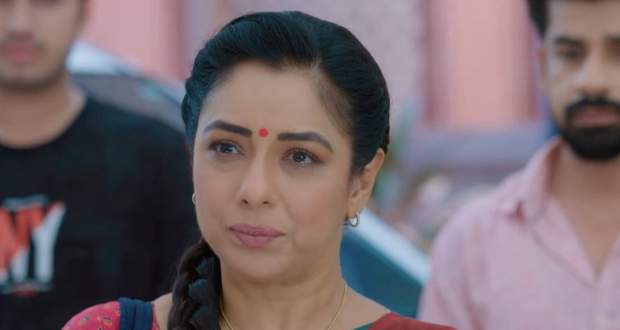 Today's Anupama 11 June 2021 episode starts with Kavya getting scolded for being excited while she talks back to everyone.

Everyone leaves and the kids tell Anupama that Kavya will fight with them.

She tells them to ignore her while Pakhi gets emotional and Anupama consoles her.

Elsewhere, Kavya tries to romance Vanraj who gets emotional sensing the driver looking at them from the mirror.

The Shah's and Anupama reach home after which she hugs the kids and takes blessing from elders.

Anupama says her last words and is about to leave while Hasmukh stops her and says that he wants to give Vanraj his wedding gift.

He asks Anupama if she has taken everything of hers and goes inside.

He gives Vanraj an envelope which Kavya takes and gives another one to Anupama.

They see the letter and Kavya supports Hasmukh in his decision while Anupama questions him.

Vanraj reads the letter while Hasmukh reveals the divided house between Vanraj, Dolly, and Anupama shocking everyone.

© Copyright tellybest.com, 2020, 2021. All Rights Reserved. Unauthorized use and/or duplication of any material from tellybest.com without written permission is strictly prohibited.
Cached Saved on: Tuesday 30th of November 2021 01:43:37 PMCached Disp on: Wednesday 1st of December 2021 03:48:18 PM