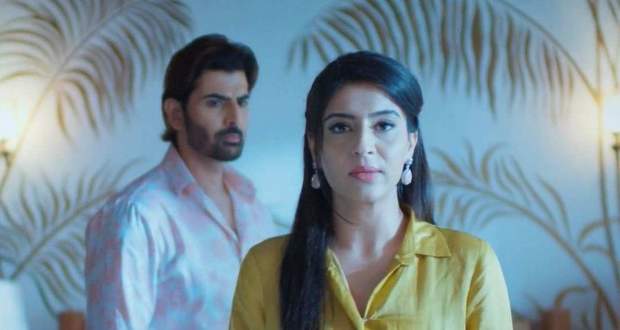 Today's Anupama 11th June 2022 episode starts with Anupama and Anuj arriving at their new house while the media bugs them.

Meanwhile, Barkha and Ankush arrive trying to steal the shine of the couple.

Further, Anupama waits to enter the house but Barkha takes everyone with them without completing any rituals of the Greh Parvesh.

Anuj gives a statement about joining his family business again but Barkha interrupts by saying that Ankush is joining Anuj in his business.

Anupama is cringed after noticing everyone entering the house with shoes on before the puja.

Barkha arrives and Anupama says it's not US but India and one should not enter a new house with shoes but Barkha continues to support her views.

On the other hand, Anupama enters the house with Anuj and sticks a picture of Ganesha at the entrance.

Further, Kavya talks to Leela on how Anupama will be living in a posh colony which makes Leela and Vanraj a bit jealous.

Later Pakhi says that they should have got a bit better clothing as Anupama will be embarrassed because of them and their clothes.

Hasmukh explains that one should not give much importance to the clothes and focus on the good heart instead just like Anupama.

Meanwhile, the Shahs arrive at the new house but they are stopped at the entrance which makes Vanraj angry.

Vanraj blasts the manager by saying that he should ask Anupama and Anuj about their identity and taunts Bapuji that their daughter has forgotten about her father and mother after getting married in a big house.

Vanraj is explaining to the manager while Barkha arrives and talks rudely with Hasmukh asking him who the hell are you.

Anupama says that this is her family and pride while Barkha says she had no idea but Vanraj says that he got a clear idea about who she is.