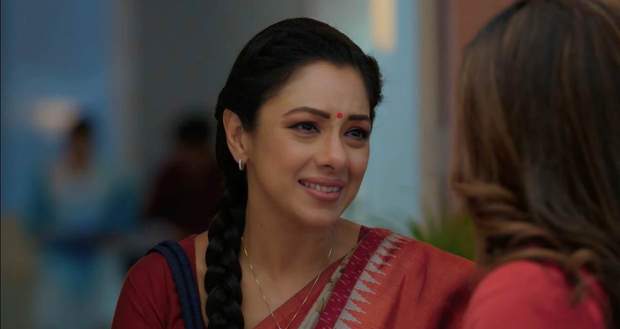 Today's Anupama 11th March 2022 episode starts with Anuj meeting with Jignesh and telling him about his restlessness.

Anuj predicts that if Kinjal’s condition does not improve then Anupama has to depart from him.

Meanwhile, Anupama comes outside with Paritosh and asks him why he ran out of the room earlier.

Paritosh answers that Kinjal needed Anupama and he does not want the child so he made his exit.

Hearing her son, Anupama gets enraged and warns Paritosh not to run away from his responsibilities as he will the father even if he does not agree.

As Paritosh leaves, Anupama messages Anuj telling him that she needs a bit more time, and gets an instant reply.

However, on entering the house, Anupama sees the family members gathered up and asks what the matter is.

Vanraj, despite Hasmukh and Kavya’s resistance, announces a decision to Anupama which puts her into shock.

Samar tries to console his mother but Anupama asks him to leave her alone.

Slowly walking into the courtyard, Anupama calls Anuj and gets surprised to see him standing outside the house gate.

Anupama walks to him as tears slip from her eyes. On Anuj asking about the matter, Anupama tells him about Vanraj’s decision.

Vanraj proposed Anupama stay in the Shah house until Kinjal recovers from her anxiety and asks her to take care of her during the pregnancy.

Anuj, disappointment luring in his eyes, listens to Anupama as she expresses her dilemma between responsibility and love.

He tells Anupama to return to her house so that they can bring her things back, Anupama cries while thanking Anuj for understanding her.

Watching the whole scene, Vanraj relics the sadness of Anupama and Anuj to his content.

Later, a little fluffy moment sparks between Vanraj and Kavya, Kavya prays that Vanraj succeeds in getting the contract.

The next morning, Anuj drops Anupama and asks her to take time for him, even if it’s 5 mins.

Anupama assures him that no matter what, she will always remain “Anuj’s Anupama”.