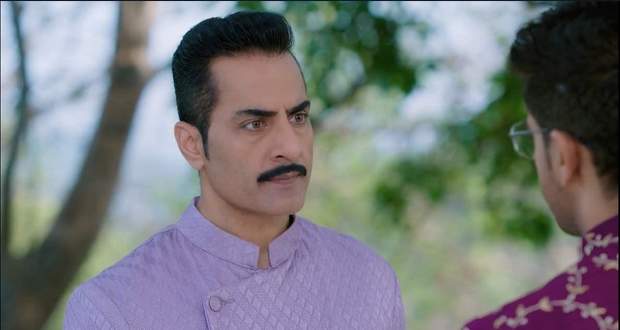 As Kavya tries to separate Anupama from Anuj, Anuj panics in real life and begs Kavya not to marry Anupama to another person.

Anupama notices Anuj’s behavior and tries to calm him down by comforting him.

However, the dance continues and reaches the happy ending of marriage with Anupama and Anuj exchanging garlands with each other.

Just when Anupama was about to put the garland on Anuj, Hasmukh collapses on the floor with a loud thud.

Everyone gasps in surprise on seeing Hasmukh and rushes to aid him at the earliest.

Anuj notices GK shaking and asks if he is hiding something from him and the family.

GK tells that Hasmukh has denied him to disclose anything while Kavya discovers Hasmukh’s reports lying on the floor.

As everyone tries to figure out what is written in that report, Anuj announces that GK knew about everything from before.

Vanraj instantly accuses GK of being selfish in not telling anyone about Hasmukh’s condition but Anuj defends GK.

Finally grasping the situation in his head, Vanraj declares that it is Anupama and Anuj’s fault that Hasmukh is in this condition.

Leela and Vanraj go on a rampage to blame Anupama and make her feel guilty for Hasmukh’s condition and announce that Hasmukh is not going to attend this marriage anymore.

Just then, Hasmukh wakes up and slowly tells everyone that he will die if he does not attend this marriage himself.

The doctor comes and checks Hasmukh and informs Vanraj that he needs an operation at the earliest.

After the doctor leaves, Anupama and Anuj declare that Hasmukh’s treatment will take place first, then their marriage.

Anupama runs inside while crying as she is hurt by the guilt and thinks that it is her fault.