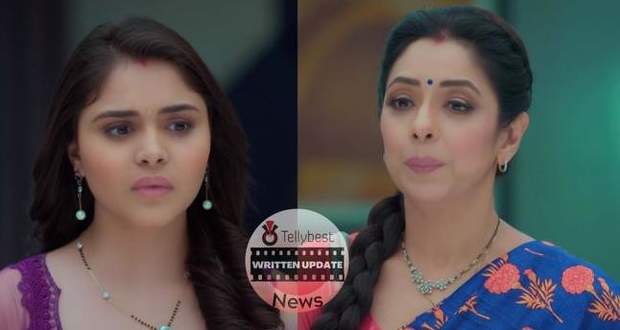 Today's Anupama 11th November 2022 episode starts with Pakhi telling Anuj that Anupama's thinking is middle-class and that's why the wedding outfit is basic.

Pakhi further asks Ankush and Adhik if Gujrati weddings in the USA also take place in such cheap-looking sarees.

She says that just because Vanraj is upset with her doesn't mean she will not fulfill her wedding wishes.

Anupama tells Pakhi that her continuous emotional blackmail is the reason she is getting everything.

Anupama then tells Anuj that before going to Shah House she wants to visit the Temple to seek blessings for the upcoming wedding.

In the meantime, Barkha lies to Ankush about going wedding shopping and goes to the Shah house to apologize.

Leela is astonished to see Barkha apologizing to her.

Barkha says she initially had a lot of problems but now she is genuinely very happy for Pakhi and Adhik.

Leela then reminds Barkha of all the things she said against the Shah's status and against each one of them.

Barkha says she has realized that all these things don't matter, but what matters is that her brother loves Pakhi.

Suddenly, Anuj, Anupama, Pakhi, and Anuj arrive there and Anupma asks Barkha why she didn't come along with them.

However, before Barkha could answer Kinjal calls out to Anupama who is very excited upon seeing her and Arya.

As Anupama is about to take Arya, Pakhi swoops in to cuddle with Arya.

Meanwhile, Leela asks Barkha why her heart is suddenly singing a different tune.

Barkha says that she has made a wonderful wedding plan for Pakhi and Adhik and has shortlisted several themes.

Barkha then tells Pakhi about a beautiful designer lehenga she has selected for Pakhi which her designer friend is giving to her for 20 lakhs.

Leela asks Barkha about who is paying Anuj or Ankush.

Pakhi asks why Anupama and Leela only care about money and not happiness.

Kavya also chimes in saying that the cost is not justified.

Pakhi who is not calming down reminds Kavya about her own wedding where she didn't adorn any traditional clothes as that was her choice.

Barkha further instigates Pakhi by mentioning all the other expensive things she has booked for the wedding.

Barkha asks Leela why she has a problem when Vanraj doesn't care.

Devika then tells Barkha that the setup she has created is similar to Barkha's but only costs 4 lakhs.

Anupama and Anuj thanked Devika for coming on such short notice.

At the Kapadia house, Anupama and Anuj berate Barkha for having such an expensive wedding plan.

Ankush asks Barkha why is she suddenly so bothered about Pakhi.

At Shah house, everybody is practising for Pakhi's sangeet, except Vanraj which makes Pakhi sad.

Meanwhile, Kavya coerces Vanraj to join the celebrations as he is hurting everyone but especially himself by not attending.

© Copyright tellybest.com, 2022, 2023. All Rights Reserved. Unauthorized use and/or duplication of any material from tellybest.com without written permission is strictly prohibited.
Cached Saved on: Monday 21st of November 2022 01:35:05 AMCached Disp on: Tuesday 29th of November 2022 10:14:36 AM