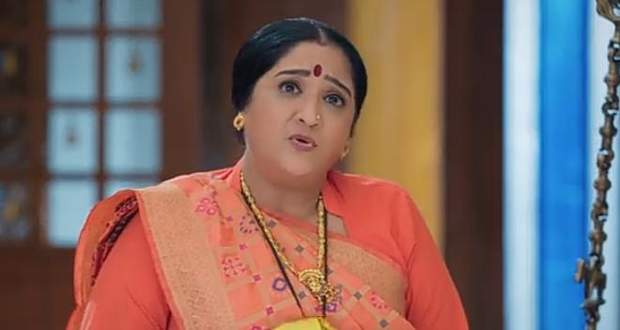 Today's Anupama 11 October 2021 episode starts with Kavya taking Anuj's offer and thanks to him while he tells her to thank Anupama.

Meanwhile, Leela sees Pakhi making cake in the kitchen who reveals that she topped the half-yearly exams and wants to celebrate it with her family and bring happiness.

Kavya walks to Anupama and thanks her while Anupama tells her that she deserved the job and that she remembers when she used to respect her as a woman before her affair with Vanraj was exposed.

Elsewhere, Leela argues with Hasmukh saying that Anupama is stressing out Vanraj while Hasmukh gives her a befitting reply which makes Leela tear up.

Later, Pakhi waits for Anupama and Vanraj while Nandini tells Kinjal that Samar fell while doing dance practice and thinks that someone hindered with the props.

Kinjal suggests that it might be Rohan but Nandini refuses saying that Rohan doesn't know of Samar being in Delhi.

Further, Kavya and Anupama return home together while Vanraj also comes home and Pakhi celebrates with everyone.

Later, Kavya tells Pakhi to go to her room and informs the family that she has gotten a job in Anupama's project at Anuj's company which angers Vanraj.

He rebukes Kavya saying that she begged Anupama for a job while Kavya stands up for herself and says that she just cares that she got a job.

Upcoming Anupama written episode update: Anupama and Vanraj try to get along for Pakhi.