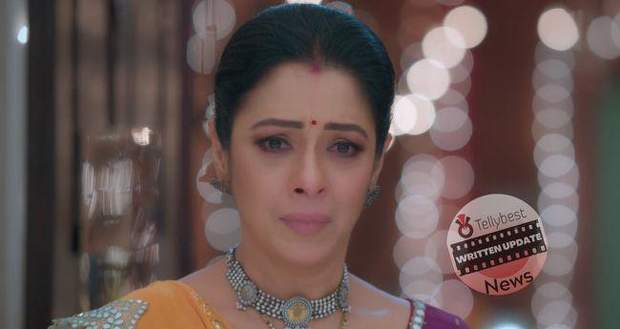 Saying this will remind him of what he needs to do, Anupama says Toshu is on a very difficult task as he will have to fight himself.

Rakhi Dave cuts the cake with the Shahs while Leela asks Rakhi if she has thought about how she wants to celebrate her birthday after becoming a Nani.

Saying all the ladies need a break, Rakhi says all must go outside for lunch.

Anuj jokes & states that only the ladies but the guys need some break too.

Afterward, Pakhi informs the lady gang that she won't be joining them as she has a group project to work on.

Leela glares at Pakhi and says if she won't go, Leela won't go too.

Pakhi complains that she doesn't have a personal life while Leela tells her that all the Nani's & Dadi's of the world are born to destroy the new generation's private life.

After Leela agrees to go with all the ladies, Anupama tells Pakhi that all the men are here to drop her wherever she needs to go while reminding Pakhi not to do anything that lets all of them down.

Vanraj comes and agrees to keep an eye on Pakhi and asks Anupama to enjoy.

Afterward, GK & Hasmukh get into a playful banter while Jignesh says what is the purpose of the married men in the party.

Hasmukh says when all the ladies are out, they all become bachelors automatically.

Rakhi teases them, saying "naughty boys" while Pakhi plans to get out of the house as soon as the men get involved in the party.

At Kapadia house, Barkha tells Ankush she doesn't want to join Rakhi & the gang but Ankush says it is best they go, rather than sit at home.

However, Barkha agrees to go so she can find any information against Anupama.

Meanwhile, Anuj says he will miss Anupama and exaggerates that one day is a long time to be spent without her.

With tears in her eyes, Anupama bids goodbye to Anuj while Vanraj sees Kavya off.

Hasmukh also advises Leela to just enjoy the picnic, not wage a war.

Ankush & Barkha join the gang as well while Leela states all the ladies will return as each other's BFFs.

Rakhi takes Leela's side along with Kavya who says all the men are full of anger & arrogance.

Ankush states all the men can become BFFs too while the ladies get into the taxi.

Vanraj strokes Pari's forehead, saying he will miss her while little Anu promises the moustache uncle (Vanraj) to take care of Pari.

Anuj gives a flying miss to Anupama while Pakhi internally gets giddy.

© Copyright tellybest.com, 2022, 2023. All Rights Reserved. Unauthorized use and/or duplication of any material from tellybest.com without written permission is strictly prohibited.
Cached Saved on: Monday 21st of November 2022 05:02:14 PMCached Disp on: Monday 5th of December 2022 01:20:31 AM