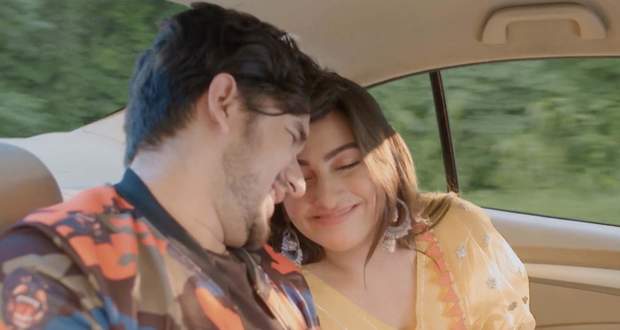 Today's Anupama 12 April 2021 episode starts with Samar stretching for his competition while he gets injured and Nandani tends to him.

Kinjal and Paritosh get into an argument regarding the baby while Pakhi sees them and calls Vanraj.

Later, Kinjal is surprised by a joint video call from Anupama, Vanraj and Paritosh while other family members are with her.

Rakhi says that the reports have arrived and reveals that Kinjal is not pregnant.

Pakhi adds Nandani on the call and Samar reveals winning the trophy to the family.

Later, Nandani and Samar are on their way home in the car while he compliments her.

However, two men on the bike are following them.

Elsewhere, Kabir calls Pakhi and requests her to come to his party while she gets surprised by his call.

She declines his offer saying that her family won't permit her but messages him that she will try.

Kabir shows his friends the message and says that he will woo her and will kiss her to win the bet.

Pakhi finds out that no one will be present at home and gets peer pressured by her friends to go to the party.

Samar and Nandani get attacked by the goons and they demand luxury items from them.

The goons demand Nandani's ring that Samar gave her and she declines.

Upcoming Anupama episode (tomorrow) update: Kavya manages to steal the divorce documents and show them to the Shah family.

© Copyright tellybest.com, 2020, 2021. All Rights Reserved. Unauthorized use and/or duplication of any material from tellybest.com without written permission is strictly prohibited.
Cached Saved on: Wednesday 28th of July 2021 04:33:58 AMCached Disp on: Wednesday 4th of August 2021 04:10:31 AM