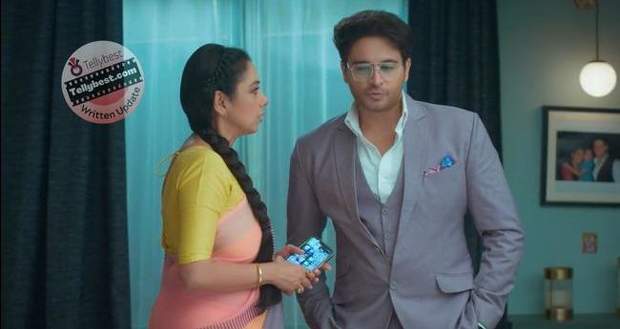 Adhik denies doing so, however, things escalate and Ankush speaks in favor of Adhik while Vanraj threatens Ankush.

Anuj comes in between both of them and screams "Enough!" as Anupama looks at Adhik and asks whether whatever Vanraj is saying is true or not.

Adhik reveals that since Anupama saw them fighting herself in the morning, the tension started from there only.

He says that when he came back home and saw the dishes undone and questioned Pakhi, she pushed him onto the bed and broke one crockery.

In between he lost his temper and slightly pushed Pakhi but she made a big deal out of it.

Anupama tells Vanraj to respect Adhik as he is his son-in-law but Vanraj taunts her she is going to favor him since he is from Kapadia Family.

She screams and challenges Vanraj to hear what Adhik has to say since he only heard Pakhi. However, Vanraj in turn challenges Anuj and says when the same thing will happen with Little Anu, then he will see what Anuj does.

Barka warns Vanraj not to bring little Anu but Vanraj says how can he believe Barkha since she came to Shah House herself, saying how Adhik flirts with other girls.

Anupama reminds Vanraj that Adhik was the only one who took care of Pakhi when he ousted her from the house and he has no right to disrespect him.

Before leaving, Vanraj states that he will let Adhik take Pakhi away but not let him dance on her head as he is equipped to take care of his daughter.

Later, Ankush tries to calm down Adhik and asks him to rest in his room at Kapadia Mansion. Similarly, Pakhi at Shah House asks Kavya if Vanraj is back home.

Kavya glares at her & says isn't it enough manipulating for one day for her. Vanraj finally comes and tells Pakhi that he has scolded Adhik for hurting her physically.

However, Pakhi in a low tone tells Vanraj that it was an accident.

Kavya gets angry and yells at Vanraj for blindly believing in Pakhi while Ba agrees and states this was Pakhi's mistake and everyone was busy making Vanraj angry.

Samar says this is a childhood habit of hers for lying and Paritosh gently reminds Pakhi that lying as an adult has grave consequences.

Vanraj inhales deeply and tells Pakhi to spit out her anger but Pakhi says she derived it from Vanraj himself.

Kavya also advises her to apologize to Adhik but Pakhi questions why should she say sorry.

Kavya turns to Vanraj and reminds him that parents shouldn't interfere in kids' fights, especially couples who will be lovey-dovey in a matter of seconds but the people who fight for them will be labeled wrong.

At Kapadia House, Anuj watches Anupama secretly munching on a chocolate bar and thinks Anupama always gets sandwiched between the two households.

Similarly, Anupama thinks that Anuj always gets stuck with problems at Shah House and cannot even concentrate on work.

Just then, little Anu arrives in the kitchen and asks Anupama to sign a school form that will take her on a picnic.

Anuj comes in smilingly and says he will sign it but Anupama tells him to focus on work as she will remember to sign it.

Meanwhile, both Adhik & Pakhi realize that they lost control.

Adhik feels he should act maturely while Pakhi feels she did wrong to involve Vanraj in the matter.

The next day, Anuj calls Pakhi out at a cafe to talk and smilingly reveals he won't take anyone's side as she & Adhik matter the same to him.

Pakhi says it is good since she thought Anupama had also brainwashed him. Anuj takes a pause before letting Pakhi know that in front of him, if she is bringing Anupama into the discussion, she must talk with manners, not otherwise.

Anuj then asks Pakhi if she & Adhik fell in love before and kept it a secret, why did she tell Vanraj about the whole argument?

Pakhi keeps quiet and Anuj states that Adhik will never raise his hand at anyone.

However, since Pakhi instigated Vanraj, Adhik is feeling hurt and angry. Anuj then questions Pakhi finally if she is willing to act stupid all her life or not.

© Copyright tellybest.com, 2022, 2023. All Rights Reserved. Unauthorized use and/or duplication of any material from tellybest.com without written permission is strictly prohibited.
Cached Saved on: Wednesday 25th of January 2023 09:36:42 AMCached Disp on: Tuesday 31st of January 2023 07:02:52 PM