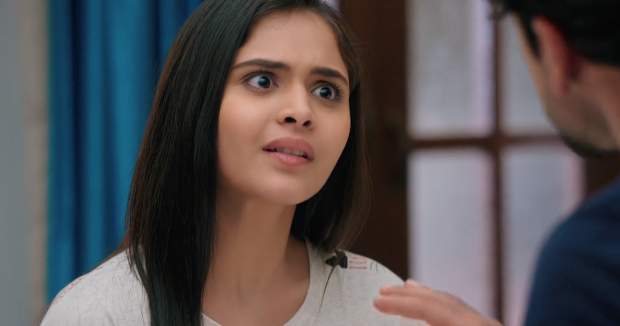 Today's Anupama 12 January 2021 episode starts with Anupama witnessing Vanraj on the floor and rushes to help him. She scolds Vanraj for trying to stand up on his own.

She gets worried and everyone else comes into the room. She asks Paritosh to check the stitches twice while Baa wants Anupama to massage Vanraj’s hand.

Kinjal opposes Baa’s demand while Anupama massages quietly. Further, Vanraj is happy to get scolded by Anupama and wishes that things get better.

Kinjal is upset with the family member’s attitude towards Anupama. She thinks only she, Samar, and Bapuji can see the pain of Anupama.

Paritosh tries to console her while at the same time, Pakhi arrives in the room without knocking on the door.

Pakhi thinks only Kinjal has importance for Anupama as she is supporting her to go against Vanraj.

She thinks Anupama is trying to throw Vanraj out of the house. She further threatens to leave the house if Vanraj has to leave.

She leaves Kinjal’s dress and goes out of the room. Anupama knows Pakhi’s behavior is the result of the situation.

Kavya is packing her bags and decides to take matters into her hands. Meanwhile, Vanraj thanks Anupama for her help and thinks he is a burden for them.

Vanraj asks Paritosh and Kinjal about their plans while Paritosh reveals about the job offer from Dave Coaching classes.

Kinjal wants to work through campus placements and then give entrance exams. Baa taunts Kinjal about working outside while Bapuji says everything will be managed.

Further, Kinjal offers to get a car from her home to get Vanraj to the hospital. However, Vanraj is not ready to take any favour from Rakhi Dave.

Kinjal argues while Anupama consoles her. Baa asks Anupama to take Vanraj to his room while at the same time Kavya arrives.

Nandini brings everyone’s attention towards Kavya and they get shocked to see her with bags.

Upcoming Anupama episode update: Kavya wishes to take Vanraj to the hospital in a cab.

© Copyright tellybest.com, 2020, 2021. All Rights Reserved. Unauthorized use and/or duplication of any material from tellybest.com without written permission is strictly prohibited.
Cached Saved on: Saturday 16th of January 2021 02:12:41 AM