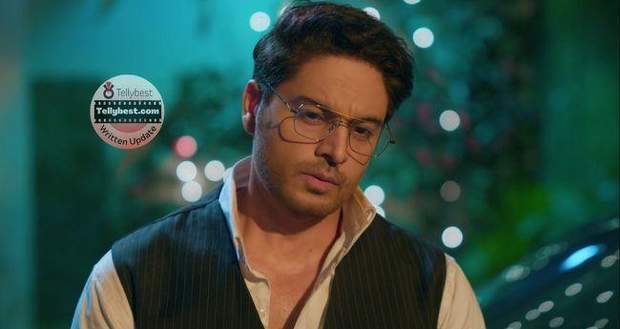 Today's Anupama 12th January 2023 episode starts with Anupama, Dheeraj, and Devika starting to dance together to convince Anuj so that he makes up with Anupama.

Anuj gets shocked after he comes downstairs as he sees them ready with the music and the props to take over the dance floor.

Anuj gets dragged around by Devika, and Dheeraj while Anupama dances sweetly to let Anuj see how much she cares about him.

As Anuj tries to open the door, Anupama shows him the keys and he realizes that the main door is locked.

However, as Anupama, Dheeraj, and Devika engage in dancing a bit too much, Anuj finds the key and gets out of the house by unlocking the door.

Anupama comes after Anuj and tries to stop him from leaving by dancing on his car but Anuj puts on a serious tone and asks Anupama to give up as he is getting late for his work.

Anuj leaves while Anupama cries thinking that Anuj is very angry at her.

Suddenly Anuj appears with a changed outfit and screams that he loves Anupama which makes the others realize that Anuj is back to his playful mood.

Anuj and Anupama dance along with Dheeraj and Devika and they patch up with each other with a hug.

Anuj apologizes to Anupama for taking so long to come back and places a kiss on her forehead while Dheeraj and Devika interrupt them by saying that they are seeing them.

Meanwhile, Vanraj hears Toshu talking with his clients and fears that he will cause some blunder.

A man named Jayanti bhai comes and asks Vanraj to call Toshu out as he has something to talk to him about.

Coming back, Dheeraj plays his favorite song which makes everyone dance like crazy until they fall on the floor with exhaustion.

Dheeraj tells the others that they should not make a mistake like him which catches Anupama's attention but she quickly gets distracted.

The four of them go outside on scooters with Anuj-Anupama on one, and Dheeraj-Devika on the other.

Dheeraj proposes that they should race with each other to the tea stall and see who is first by taking different paths.

At the same time, Vanraj and the other family members notice Toshu getting beaten up by Jayanti Bhai and some men and stop them.

Jayanti bhai says that Toshu sent him fake papers about the property which is still under litigation.

Vanraj promises Jayanti bhai to give his money back and drags Toshu by his collar angrily.

Back to MaAn, Anuj places his arms around Anupama and asks her to win the race as he believes in her.

© Copyright tellybest.com, 2022, 2023. All Rights Reserved. Unauthorized use and/or duplication of any material from tellybest.com without written permission is strictly prohibited.
Cached Saved on: Wednesday 25th of January 2023 11:26:07 AMCached Disp on: Monday 6th of February 2023 05:41:38 AM