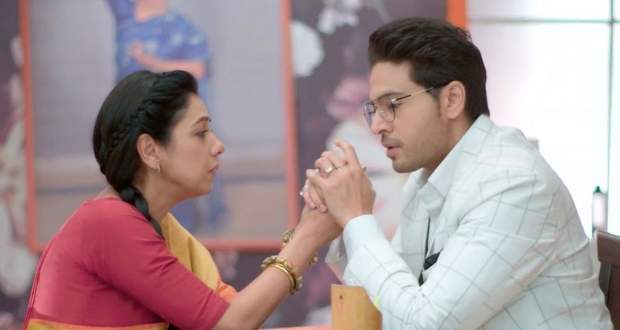 Today's Anupama 12th July 2022 episode starts with the glass behind Anuj breaking which scares Anupama as she hugs him immediately.

However, as she touches his back, she notices blood on it after which she makes Anuj turn around to inspect.

Anuj's back is lodged with glass shards in many places along with one piece in his neck.

Anupama removes the glass pieces one by one with trembling hands while Anuj tries to hide his pain and removes his jacket.

Meanwhile, at the Shah house, Vanraj notices Kavya's angry behavior and tells her to speak up after which she explains to him that his anger can destroy everything.

With emotion-filled eyed, Kavya tells Vanraj that he cannot stop Pakhi if she decides to go and live with Anupama as she is an adult now and tells him that she still cares for him.

Kavya accidentally is about to admit that she still loves Vanraj but stops herself and leaves.

Back at the dance studio, Anupama gets hysterical while treating Anuj as he makes her promise to fight for herself if he is not there in the future.

Vanraj goes to Pakhi's room to see her writing affirmations about her and Adhik continuing to be friends.

Vanraj suddenly apologizes to Pakhi and tells her that she can meet Adhik but with either her or Anupama present.

Elsewhere, Anuj gets a call from Advait from Foster Home who informs them that they can take little Anu from foster care.

At the same time, Anuj sits Anupama down and informs Anupama that they can't be the legal parents of little Anu but only their foster parents as they haven't been married yet for two years.

She asks when they can adopt Anu and he informs after five years since the child has to be in foster care for at least five years before it can be adopted legally.

Anupama tells Anuj that she is ready to take on the mission and hugs her happily after which they dance to express their happiness.

Vanraj makes coffee for Kavya showing his gratitude and revealing to her his doubts regarding Adhik, Ankush, and Barkha.