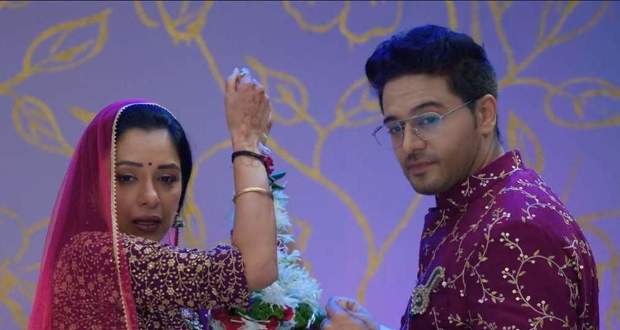 Today's Anupama 12th May 2022 episode starts with Anupama crying drastically remembering the moments when Hasmukh acted like everything was fine.

Anuj comes and stands silently beside Anupama while she bawls her eyes out.

Hugging Anuj and planting her face deep in his chest, Anupama continues to sob in despair thinking of how selfish she acted this whole time.

Anuj somehow calms down Anupama and tells her that she has to act strongly as she is the backbone of the Shah family.

On reaching Hasmukh’s room, Anupama rushes straightaway to Hasmukh and asks him the reason behind his actions while crying.

Hasmukh also cries in despair and tells Anupama that he did everything so that her marriage can go on smoothly but everything is ruined now.

Anupama and Anuj both try to make Hasmukh understand that their marriage is not more important than his life.

Adding to this, Leela declares that she and Vanraj also have some rights over him and will not let him do as he wishes in this case.

However, Hasmukh refuses to go anywhere before the marriage, hearing this, Anupama replies that the marriage will not take place until Hasmukh undergoes surgery and gets better.

Hasmukh panics and announces that if they take him to the hospital before the marriage then he will come back dead from there.

Everyone gets shocked hearing this and Anupama finally gives in to Hasmukh’s unbreakable determination.

Anupama tells Hasmukh to take care of himself and not work at all if he wants to stay at the house till the marriage.

Overwhelmed with happiness, Hasmukh takes Anuj and Anupama’s hands together and blesses them with his whole heart.

Later, Anupama gets the prescription from GK which Vanraj snatches away from her and tells her that everything she touches turns into poison.