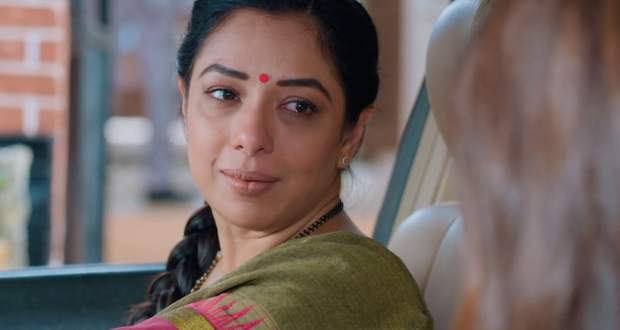 Today's Anupama 12 Nov episode starts with Anupama taking car keys in her hands and imagining giving a ride to everyone in the house. She feels confident and Vanraj fumes in anger standing on the door.

Anupama opens the car and sits on the drivers’ seat. Vanraj fumes in anger and goes to take his car keys.

He further kicks the sofa and gets hurt while Jhilmil gives lunch to him. Meanwhile, Kinjal teaches Anupama various important points about driving.

Anupama thinks she should watch first but Kinjal asks her to start driving on her own. Anupama starts the engine and leaves the accelerator to move forward.

Her car stops abruptly while Vanraj shouts and blows the horn from behind to give him side. Anupama takes the car on the side while Vanraj overtakes her.

However, his car stops and Anupama overtakes him. Anupama drives for a while around the block with proper precautions and reaches back home.

Vanraj is still outside the society gate and Kinjal offers to drop him. He starts the car in anger and leaves. Anupama gets out of the car and screams in joy.

Nandini and Jhilmil also come out and everyone dances with great excitement. Anupama tells her story from childhood and says she used to run after cars.

Anupama also reveals that she wanted to learn but Vanraj denied teaching her. Anupama is adamant to do everything she didn’t do earlier.