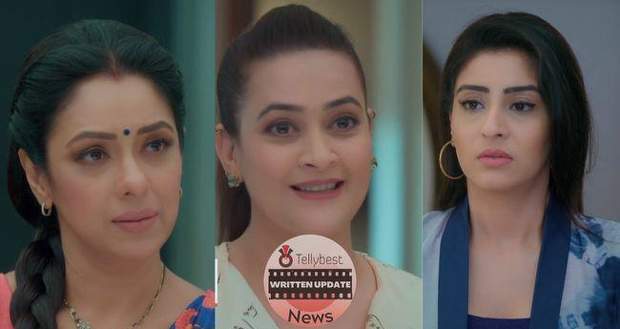 Anupama compliments Anu, however, Barka tells Anu that it can be improved.

Meanwhile, at the Shah House Pakhi slips and falls when Vanraj sees her and comes rushing towards and helps her.

Pakhi tells Vanraj that she is hurt in her heart and tries to hug Vanraj who then leaves Pakhi.

Samar and Pakhi see this and console Pakhi to not cry and Pakhi asks them if Vanraj will ever forgive her.

Anuj then goes to Vanraj's room and tells him to give deliver a file to Mumbai since Vanraj is not going to attend the wedding.

Meanwhile, Pakhi calls Adhik to ask him why he is slogging at the office on the day of the sangeet.

Adhik tells Pakhi that he will join her after his meeting and disconnects the call.

Pakhi then receives a call from Barkha who tells Pakhi that she will ensure everything is perfect for the sangeet.

Barkha asks Pakhi why she is so silent, Pakhi then tells her what Adhik said.

Barkha instigates Pakhi and says that Adhik could have been home but is being made to slog.

After a while when everyone is practising, Vanraj comes over there and announces he is leaving for Mumbai.

Vanraj says that he himself is sad and his sadness will cast a pale shadow on the wedding festivities and so he is leaving.

Pakhi and Anupama remind Vanraj about Pakhi's childhood when Pakhi was born Vanraj danced throughout the hospital.

Anupama then says that no matter how tired Vanraj was due to office he always made time for Pakhi and played with her.

Leela then says that if at any point she tried to scold Pakhi, Vanraj would throw daggers at her through his eyes.

Anupama then says that whenever Pakhi was to get vaccinated Vanraj would always argue with the doctors for hurting Pakhi.

Anupama tells Vanraj that neither can live without the other no matter how many arguments they had.

Pakhi who is crying inconsolably holds Vanraj's hand and says that Vanraj was always the perfect father but she never was the perfect daughter.

Pakhi says that from being her father's princess she has become his biggest problem and calls herself a bad person.

Vanraj hearing this can no longer stop himself and hugs Pakhi and tells Pakhi he loves her more than anything.

© Copyright tellybest.com, 2022, 2023. All Rights Reserved. Unauthorized use and/or duplication of any material from tellybest.com without written permission is strictly prohibited.
Cached Saved on: Monday 21st of November 2022 12:47:41 AMCached Disp on: Friday 9th of December 2022 05:24:36 AM