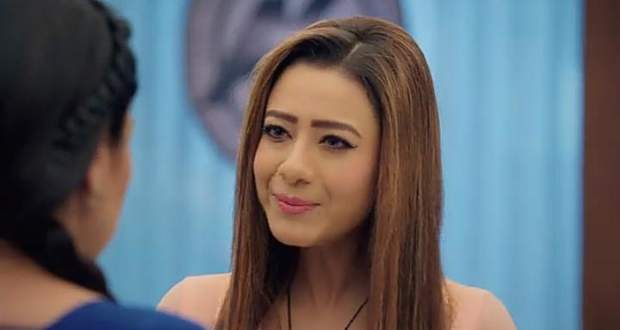 Today's Anupama 12 October 2021 episode starts with Kavya telling Vanraj that he is getting angry over nothing and tells him that he needs to see a doctor.

Vanraj angrily pushed a glass vase which shatters and injured his arms which Kavya and Anupama try to would but Vanraj keeps rebuking them.

Anupama tried to tend to his wounds but he pushes her away and Kavya holds onto her while Pakhi sees them from the stairs and falls due to panicking.

Vanraj and Anupama rush to them and take her to the sofa while she tells them that her injury is not external but that she is mentally frustrated due to their fights.

Further, she tries to put both of their point of view in front of each other and tries to convince everyone to handle the situation a little calms saying that she is tired of her whole family.

Vanraj and Anupama apologize to her say that they will try to not fight after which Pakhi clicks a selfie with them saying that she won't let them forget their promise.

Later, Anuj sees Pakhi's picture with her parents and gets confused while Vanraj comes to sit with Anupama on the swing and says that they forgot their children in their own fight.

Further, they talk to each other and come to an understanding to not try to fight for the sake of keeping their family together.

Meanwhile, Hasmukh and Leela talk and decide to maintain peace in the house.

She tells him to not expect any hope from their already broken relationship while he looks on.

Vanraj goes to his room and caresses Kavya's head while Anupama goes to Pakhi and tends to her.

The next morning, Anupama comes to Anuj's office and tells him that she can't work with him as it is affecting her children badly.