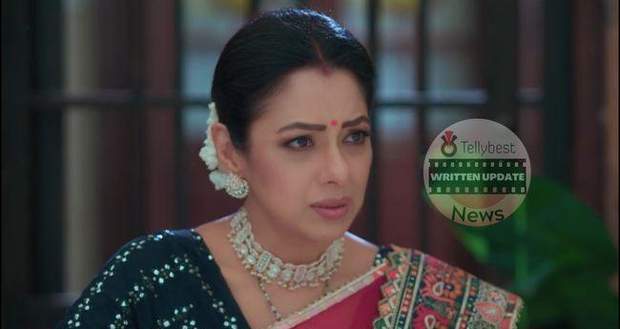 Today's Anupama 12th October 2022 episode starts with Leela telling Anupama that she is not worried about the men of the family but about Pakhi.

Anupama understands Leela's dilemma but Kavya advises both of them to leave their worries so all can enjoy the picnic.

Meanwhile, Pakhi is excited and starts getting dressed to meet her lover Adhik.

All the ladies arrive at their destination and wear picnic hats and black sunglasses over their eyes.

Walking in unison and looking like a force to reckon with, they reach a resort while Leela worries about their luggage.

Rakhi then asks everyone for their phones so they can enjoy this break and Anupama hesitates.

Kavya then asks Anupama to put the phone away as she already messaged Vanraj about Anuj's medications.

Just then, Anupama gets a call from Anuj but the ladies do not allow her to talk to him in private.

Anuj tells Anupama he misses her and asks her to say 'I love you'.

A shocked Anupama finally says it and Anuj ends the call.

Leela tells Dolly this is not cute but shameless action while Rakhi asks Ba what she used to tell to Hasmukh at a young age.

At Shah House, Samar says all the older men are boring while Anuj suggests ordering food from the outside.

Vanraj misses Toshu suddenly and a dressed-up Pakhi asks for permission to go out.

She lies that she has a group project to work on but Vanraj tells her that he is afraid she will break his trust.

On the other hand, Leela states that she won't share a room with anyone, especially Naagin.

Later, everyone picks out chits to see who will share a room with everyone & Leela gets paired up with Barkha.

At Shah House, the men start cutting up vegetables miserably & Hasmukh tells everyone to feel grateful for their wives.

Vanraj then asks Samar to cut the Bhindi and exchange the Okra with the peas.

Suddenly, Vanraj sees a worm and gets scared, passing the worm onto Ankush's lap.

Meanwhile, Adhik and Pakhi drive to the same resort, holding each other's hands.

Later, Jignesh & Anuj tease Hasmukh who is sharing romantic anecdotes with everyone.

Afterward, they all take a group photo and send it to the ladies.

At the same time, the girl gang tries to take a photo with a pout.

Feeling worried about Pakhi, Anupama tries to call her with Rakhi's phone while Pakhi gets upset.

However, Anupama lets Pakhi directly know if she comes to know about any wrong activity done by Pakhi, Anupama won't tolerate it.