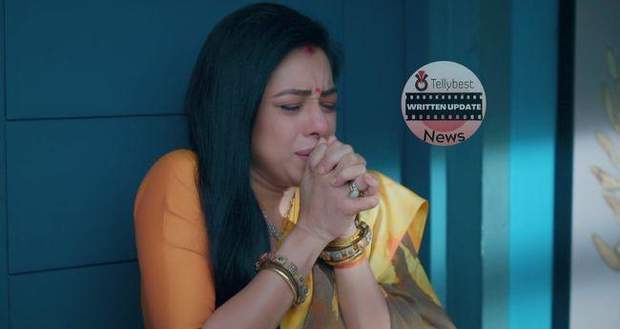 Today's Anupama 12th September 2022 episode starts with Anupama asking Anuj if he is tired but Anuj says he is fine and she should focus on the ceremony.

Suddenly a plate of flowers drop beside the baby where Meenu and Choti Anu were present.

Leela does not control her tongue anymore and assumes it is Choti.

She begins scolding her and insulting Anupama that she should have kept Choti away.

After a handful of scolds and taunts, Meenu interrupts and says that the plate fell from her even though Choti warned her to not do anything.

Leela becomes quiet and Hasmukh scolds her for her small heart and uncontrollable tongue.

Leela apologizes to Choti who forgives her instantly.

Barkha sees a serious Anuj and adds fuel to fire that Leela did not say anything to Meenu because she is her family which makes Anuj colder.

Later, the naming ceremony starts with everyone singing claiming their relationship with the baby melodiously.

Afterwards, everyone says a name and decides the name with the most votes will be considered.

Many suggested various names like Adhira, Mihira, Akira, and Grace.

Kinjal gave the name Samaira while Toshu said Jalpa which was rather disliked by Rakhi.

Kinjal asks Vanraj and Anupama for a name and the duo simultaneously says ‘Arya’.

Rakhi appreciates their connection and everyone like the name, Arya.

Anuj looks at them and smiles slyly repeating the baby’s name and the baby smiles.

The rituals from the name of the baby are done and ‘Arya’ gets written on a mirror by Pakhi.

Later, she grabs Adhik’s hand to get a photo while Samar intervenes and says that he has not forgotten the past so Pakhi must take care of where she is going.

Following this, everyone rejoices and begins singing and dancing in a circle when Toshu’s phone drops.

Anupama picks it up to keep it safe but finds an audio message from a girl and listens to it.

She gets to know everything and her world falls apart.

She takes Toshu with her telling everyone there is a lamp lighting ritual the father has to do.

Anupama pulls Toshu to a room and locks it while glaring at him with furious eyes.

Meanwhile, Leela sees off a few relatives and tells them to find a good match for Samar while she thinks Pakhi’s behavior makes her want to marry off Pakhi first.

Toshu looks at the phone Anupama is holding and gets the idea that she knows everything now.

Meanwhile, Rakhi gets anxious about what Anupama is going to do with Toshu since she saw her grabbing Toshu away from the crowd.

© Copyright tellybest.com, 2020, 2021. All Rights Reserved. Unauthorized use and/or duplication of any material from tellybest.com without written permission is strictly prohibited.
Cached Saved on: Friday 30th of September 2022 05:16:11 PMCached Disp on: Saturday 1st of October 2022 04:25:52 PM