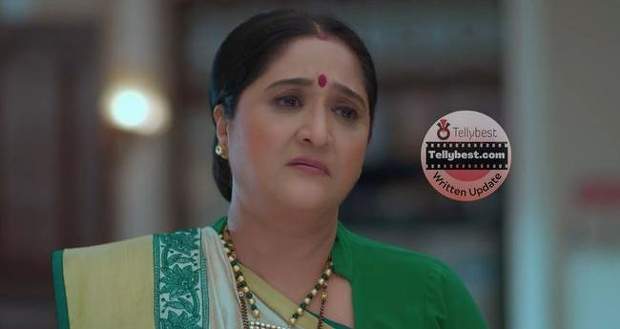 Today's Anupama 13th December 2022 episode starts with Anuj asking Pakhi seriously if she is willing to dive into stupidity and worsen her relationship with Adhik as the days pass by.

Anuj's question strike Pakhi and she gets ready to meet Adhik and apologize to him.

However, as Pakhi goes back to Kapadia House, she sees Dimpy talking with Adhik as they smile and chatter together.

Through the window, Pakhi sees them together and misinterprets their presence while Dimple is just trying to make Adhik laugh and urge him to forget his fight with Pakhi and go placate her heart.

Meanwhile, Anupama is frustrated as she munches on a chocolate bar alone. However, her alone time is disturbed by Vanraj who claims that Anuj came to meet Pakhi outside in a cafe.

Anupama gets shocked when Vanraj asks her and her dear husband to stay away from Pakhi as Anuj didn't come to talk to Pakhi as her buddy but as Adhik's uncle.

Anupama gets angry and warns Vanraj to talk with manners but Vanraj's point is that she and Anuj should stay away from Pakhi as he is ready to take Pakhi's responsibility alone.

Taunting Vanraj that only he and his dear daughter are the most innocent in the world, Anupama says that she has no liking for meddling in their lives but it is them who aren't able to handle their lives and reel everyone into their drama.

Later, Little Anu informs Anuj that Anupama forgot to fill out her picnic form and Anuj advises her not to get angry as she is a little stressed.

After a while, Anupama comes back home after buying vegetables and her hands shake while she drinks a glass of water.

Anuj notices her condition and asks if she is feeling well or not, but Anupama lashes at him, questioning why he went to meet Pakhi.

Anuj gets confused and tells Anupama that he went to make her understand things because he cannot see his wife, his Anu in deep stress as he knows how she is stress eating and ruining her health.

Anupama stutters and asks Anuj to stay away from Shah Household's matters as solving problems for them is her duty, not his.

She makes it clear that she doesn't like when Vanraj or Pakhi speaks boorishly about him but Anuj doesn't care two hoots and reminds Anupama that they are a team.

However, Anupama is not able to understand Anuj as he says she is lashing out at him because Vanraj did the same thing to her.

Anuj takes pauses and tells Anupama that no matter how many times she tries to enhance the Shah family's life, they will still blame her for all their problems.

Instead of fighting them, Anuj says that she is fighting with him.

Anupama gets quiet and says she has tried so hard to be the perfect wife and mother but she apologizes if she forgot her duties and joins her hands together.

Stating that she doesn't want Anuj to meddle in her and Vanraj's duty of bettering a mannerless Pakhi, Anupama says that she is a mother, however, Anuj gently reminds her that mothers shouldn't try to become Gods.

At the end of their argument, Anupama tries to convince Anuj that she can manage and handle everything on her own when he asks her whether she signed Little Anu's form or not which he asked for previously.