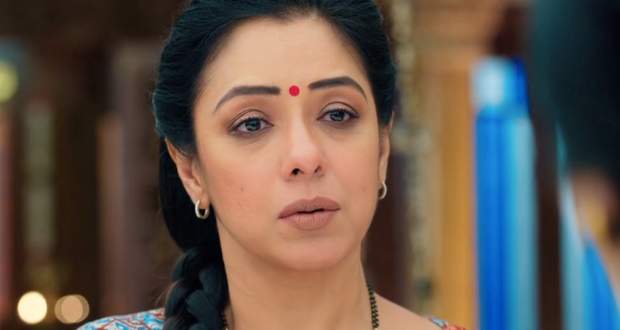 Vanraj calls Kavya and thinks she is crazy because of her move. Kavya shares her love feelings while Vanraj disconnects the call.

Further, Nandini rebukes Kavya for her actions. Meanwhile, Anupama tries to explain to Kinjal why her words are not taken the right way.

She states that she should give respect to elders even when they are wrong. Later, Vanraj comes out to leave for the hospital.

However, Kavya comes with the cab and asks Vanraj to come along. Vanraj resists while Anupama gives his file to Kavya and asks him to go with her.

Kinjal witnesses Anupama’s upset state and wants her to move on from the relationship with Vanraj.

Vanraj learns that he is recovering fast at the hospital and thanks his family. Further, Kavya wants him to come along to her house as he is better.

Baa rebukes Anupama for letting Vanraj go while Anupama wants her to question her son as well. She is tired of holding onto the relationship.

Anupama apologizes for being rude but wants to share her feelings with Baa. She also wants to be understood.

Paritosh arrives and Baa thinks Vanraj has gone with Kavya. However, he comes inside without the plaster on his leg.