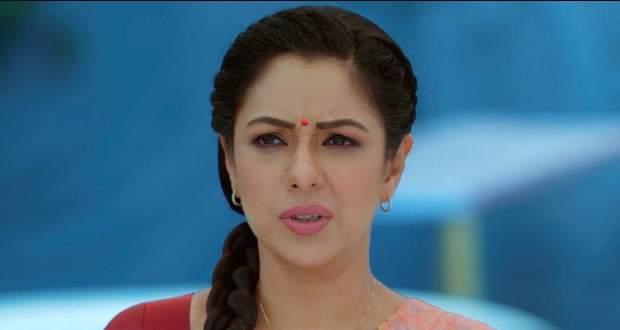 Today's Anupama 13 January 2022 episode starts with Anupama supporting Pakhi to dream big and telling her that she doesn’t have any problem with Pakhi going to the foreign and studying.

Pakhi hugs Anupama in joy but Anupama asks her if she has to go now only.

Anupama suggests Pakhi wait a few years until she grows into an adult and then she can successfully go to the US and study there.

Pakhi gets offended by Anupama’s suggestion and tells her that she can’t afford to be like Anupama among her friends, she asks Anupama to talk to Vanraj and Hasmukh.

Malvika asks Anupama to join her for the office, Anupama gladly agrees, both enter the office building.

Anupama imagines Anuj and Vanraj in a serious fight and gets nervous, she feels relieved when she sees them just arguing over simple things.

Later, Anupama scolds Anuj for fighting with Vanraj, both accidentally utter intimate words to each other and share a romantic moment with Malvika interrupting it.

After some time, Malvika shows Vanraj a jar of rasgullas, she says they should also become BFFs like Anupama and Anuj.

Vanraj asks if Malvika is okay now or not, Malvika tells him that he saw her when she was completely broke off.

Vanraj replies that it is normal for everyone to break down once in a while, Malvika makes Vanraj sit and feeds him rasgullas with her own hands, both get touchy with each other.

Anuj and Anupama see them like that, Anuj feels uncomfortable and leaves making an excuse.

Malvika on seeing Anupama dashes off to feed Anuj the rasgullas, Anupama comes and stares at Vanraj with a questioning gaze.

Upcoming Anupama episode updates: Anupama and Vanraj confront each other regarding his and Malvika's relationship.

© Copyright tellybest.com, 2020, 2021. All Rights Reserved. Unauthorized use and/or duplication of any material from tellybest.com without written permission is strictly prohibited.
Cached Saved on: Thursday 20th of January 2022 10:57:40 AMCached Disp on: Friday 21st of January 2022 04:54:11 PM