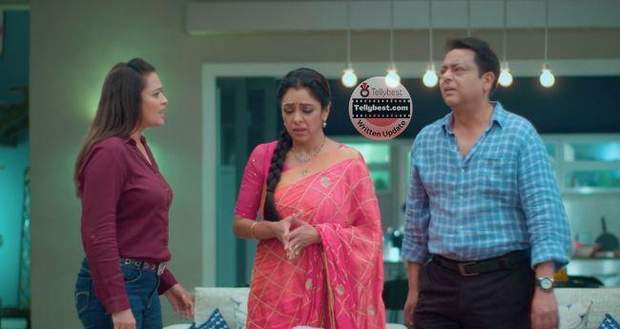 Today's Anupama 13th January 2023 episode starts with Anuj telling Anupama that this day is nearly perfect for both of them with the trip and their spending time with each other.

Anupama replies to Anuj and says that it would have been perfect if Anu had been there with them.

Anuj agrees with Anupama and says that even though Anu came to them a few months ago, she has become an inseparable part of their lives.

The topic of discussion shifts from Anu to Dheeraj and Devika with Anuj saying that they must be planning something by sending them away separately.

Anuj tells Anupama that it would be great if Dheeraj and Devika would come to like each other and find their life partners in each other.

Anupama gets happy hearing Anuj’s viewpoint and says that would be the best thing as both Dheeraj and Devika are very good people.

As Anupama asks Anuj if they should help them to get closer, Anuj says that Dheeraj and Devika are much more intelligent than them.

Meanwhile, Vanraj bursts into anger over Toshu and asks him why he did such a crime that could lead him to jail.

Samar tries to make Toshu understand that whatever he did was a fraud but Toshu taunts Samar for his dancing occupation.

Dimple defends Samar to which Leela gets irritated and asks her not to speak about their family matters.

Vanraj asks everyone to stop talking as he is talking with Toshu currently and asks Toshu to return Jayanti Bhai’s money.

Toshu tells everyone that he has spent the money already on office setup and paperwork.

Vanraj announces that Toshu’s business of property dealing ends here and will not be functional anymore.

At the same time, Anupama and Anuj reach the tea stall first and wait for Dheeraj and Devika to come.

Dheeraj tells Devika that common friends are the most general love trope that has potential in it.

Devika replies that they can meet each other in another way where she hits him with her scooter.

With the continuation of the bantering, Dheeraj and Devika reach the tea stall where Anuj and Anupama taunt them for being late.

Anuj and Dheeraj start to make fun of women as Anupama and Devika talk about shopping.

Without telling Anuj and Dheeraj, Anupama and Devika take off in the scooter while Anuj runs after them with Dheeraj pulling the scooter.

On the other hand, Vanraj finds the locker locked and calls Kavya continuously to get the key.

Kavya picks up the call after Vanraj calls many times and tells him that she will give him the key once she returns as it is with her.

Later, as Kavya introduces Mohit to Vanraj on the video call, Vanraj asks Mohit to stay away from Kavya as he notices him touching her.

Mohit gets offended by Vanraj’s words while Kavya feels embarrassed and cuts the call.

Vanraj asks Jayanti bhai to give him the time limit for tonight but Jayanti bhai decides to do things his way.

In the meantime, Dheeraj suggests that they need to eat noodles in the middle of nature to which both Devika and Anupama agree.

Dheeraj takes out noodles from the scooter and tells Anuj-Anupama to roam around while he and Devika light up the fire.

Anuj takes Dheeraj aside and tells him to allow himself to get to know Devika as they have many similarities.

Coming back, Leela asks Samar and Dimple what is going on between them and gets shocked to see them silent.

Leela tells Samar and Dimple that they should not even imagine taking any step further than that.

Vanraj decides that he has to take ultimate control over the family members to prevent the family from falling apart.

© Copyright tellybest.com, 2022, 2023. All Rights Reserved. Unauthorized use and/or duplication of any material from tellybest.com without written permission is strictly prohibited.
Cached Saved on: Wednesday 25th of January 2023 09:43:21 AMCached Disp on: Tuesday 31st of January 2023 07:58:18 PM