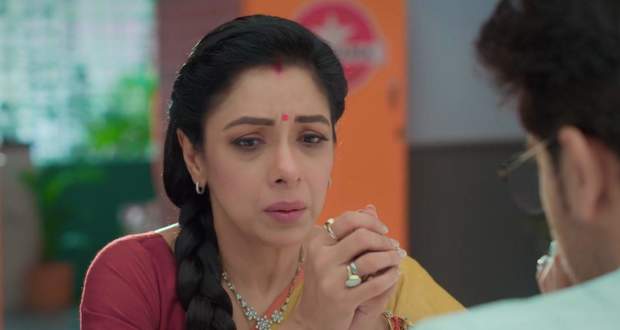 Today's Anupama 13th July 2022 episode starts with Adhik stopping Barkha from taking anxiety pills and revealing that he was caught earlier by Anupama and Vanraj.

Barkha asks Adhik what his intentions are regarding Pakhi to which Adhik replies that he wants to marry Pakhi.

Explaining to Barkha that his marrying Pakhi will give her the power to control Anupama, Adhik tries to manipulate Barkha.

Sara overhears their conversation and says that she will tell everyone the truth.

As Sara calls for Anupama everywhere, Barkha requests her not to tell them anything as things will get complex.

Just then, Anupama and Anuj arrive home and ask Barkha and Sara why they are arguing with each other.

Barkha somehow covers up the matter while Sara leaves the living room.

Ankush and Barkha get to know about Anuj’s minor accident at the dance studio and show their worry for them.

After telling them that Anuj will go to Mumbai the next day to give them a surprise, Anuj and Anupama go to their room.

Anupama does the ritual of Nazar and ties a black string in Anuj’s leg to keep him safe from others’ evil intentions.

Anuj excitedly reminds Anupama that the next day little Anu will be coming into this house to live with them as their foster daughter.

Hearing this, Anupama feels happy and nervous at the same time as she is going to become a mother again.

Anuj says that he is going to be a father for the first time as someone will call him and him only their father.

Just then, Kinjal messages Anupama to come to her as she is feeling restless.

Anuj asks Anupama to go quickly while he prepares for the arrival of his daughter.

Back at the Shah’s, Anupama arrives and handles a restless Kinjal who starts crying in anxiety that she will not be able to handle the baby.

Anupama along with others assure Kinjal that they will always be there with her to look after the baby.

After Anupama returns, she requests Anuj if they can reveal the matter of Anu to everyone prior to her arrival but Anuj refuses.

Anuj says that he will not let anyone put a question mark on his happiness at any cost so whatever questions there might be, they can ask them after Anu comes.

© Copyright tellybest.com, 2022, 2023. All Rights Reserved. Unauthorized use and/or duplication of any material from tellybest.com without written permission is strictly prohibited.
Cached Saved on: Wednesday 25th of January 2023 02:48:48 PMCached Disp on: Thursday 9th of February 2023 07:45:23 AM