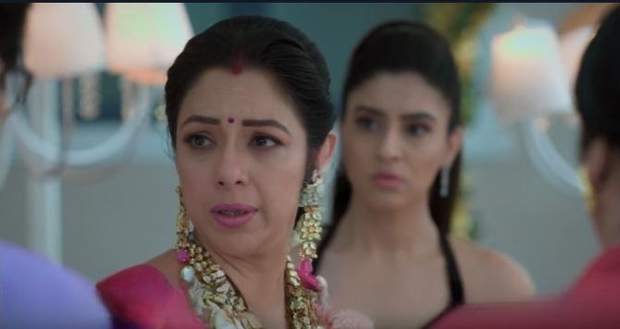 Today's Anupama 13th June 2022 episode starts with Anupama apologizing to her family for waiting outside her new house.

Further, Anuj welcomes the Shahs with a smile and hugs Vanraj with respect which Barkha notices in detail.

Later, Hasmukh offers gifts to Barkha from the Shahs while Barkha puts them below the table and Vanraj notices it.

Ankush on the other hand seems happy but Barkha says that Sara and Adhik will lag behind the Shah kids and will get nothing and she cannot let that happen.

Meanwhile, Anuj asks if something he should know while Anupama informs him that the Shah family was stopped at the door and requests him not to get angry as today is a lucky day.

Sarah introduces herself as Barkha's daughter while Samar says that he is Anupama's son and shakes hands.

Further Paritosh and Samar meet Adhik and seem to have some tension between them.

On the other hand, Anupama talks to Leela that it is the time for the Puja and she will clean the house and make it ready for Puja.

Meanwhile, Barkha announces Anuj's comeback and Anuj announces that the real owner of the Kapadia businesses is Anupama.

Barkha puts on the music and starts to party while Anupama seems to be worried as Puja has not been done yet.

Anupama changes the music to bhajans and says everything will be after the Puja as a new house needs to form a new relationship with this house and should start it with a Grah Pravesh Puja.

Anupama says that one can tell a person's beliefs and personality by looking at their house and a house is the reflection of a family's life.

Barkha says that her friends and business associates have not arrived to sit in the Puja while Anupama says they will.