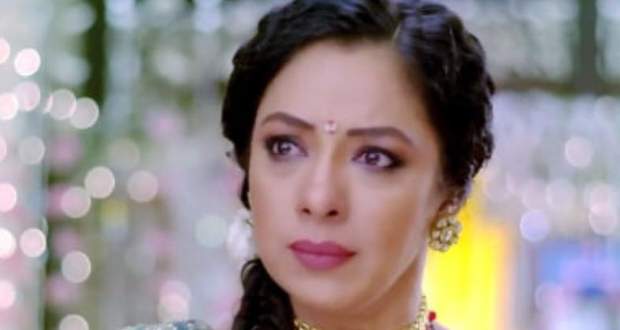 Anupama recalls her talk with them while Rakhi asks if there is something she doesn't know.

Vanraj ties the holy thread to family members while Anupama tells him to calm down as she will handle the situation but says that he will do what has to be done.

Dolly and Leela talk about Nandani and tells everyone to get the Prasad from Vanraj to get his Pooja completed.

He gives everyone the Prasad except Samar amd Nandani after which Anupama, Paritosh, Nandani and Samar dance to the song 'Shankara'.

Samar eats the sweet and gives it to Nandani after which he tries to take blessings from Vanraj but he steps telling him to get out of the house with Nandani.

However, Samar tells him that the house belongs to Anupama and that he will not go anywhere on his order and says that even he is here with his girlfriend even after being married.

Anupama gets angry at him and tells him to apologise to Vanraj while telling the family members to not interfere.

Samar says that he will apologise but asks why Vanraj is interference even after leaving the house while Vanraj recalls his past and goes out of rue house.

Leela tries to pacify him while he says that he will speak now in an angry tone and goes towards Samar while the Shah's stand shocked.

© Copyright tellybest.com, 2020, 2021. All Rights Reserved. Unauthorized use and/or duplication of any material from tellybest.com without written permission is strictly prohibited.
Cached Saved on: Tuesday 21st of September 2021 04:37:48 AM