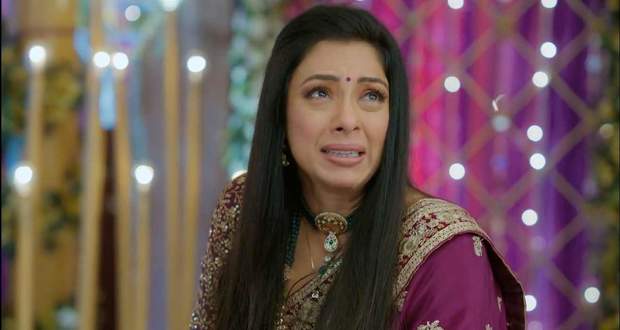 Today's Anupama 13th May 2022 episode starts with Vanraj blaming Anupama for Hasmukh’s condition and taking away the prescription from her.

Vanraj asks Anupama to stay out of these affairs as she will leave after a few days to her new family.

Replying to Vanraj’s logic, Anupama tells him that she will come often to this house as Hasmukh and her children are still there.

Leela comes and asks Anupama to not come back as she does not have anything but a hate relationship with her now.

The doctor checks Hasmukh and tells everyone that he is not allowed to overexert himself and have proper rest until the surgery.

Hasmukh cheers up everyone and tells them that his health is 50% replenished only by looking at their happy faces.

Seeing Leela making a grim face, Kinjal asks Leela to smile a bit for Hasmukh’s sake, which she does unwillingly.

The next day arrives with Kanta preparing haldi while Samar, Pakhi, and others try to take it over from her.

Dolly comes to Vanraj and Leela and requests them to join the haldi and wedding with them while the children also join with Dolly.

The Haldi ceremony commences with the family members gathering along with Anupama and Anuj.

Malvika and others try to pull Anuj’s leg by taunting him which makes everyone laugh.

As the ceremony commences, Hasmukh stares at everyone’s smiling faces with contentment.