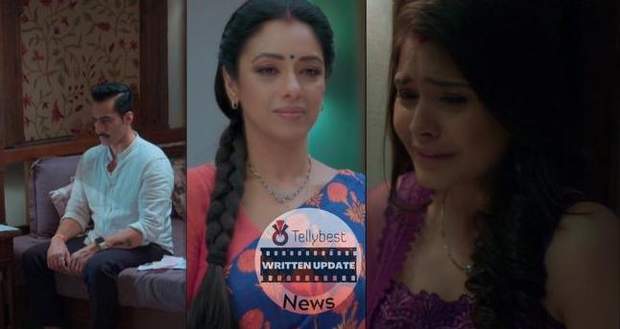 Today's Anupama 13th November 2022 episode starts with Vanraj rubbing away the tears from Pakhi's face and asking her to not cry anymore.

Afterward, whilst everyone is dancing Anupama sees the family photo fall down and break and wonders what this omen means.

Meanwhile, at Kapadia House, Anuj sees Anupama and flirts with her and later tells her that Vanraj wants to pay for half the cost of all the events.

Pakhi and Adhik then go around the room to see the decorations and Pakhi says that Devika misled them as this decor is very cheap looking.

Adhik consoles Pakhi saying that even if that might be the case finally everyone is ready to join their celebrations and hence she shouldn't spoil her mood.

Pakhi says to herself that she didn't want to spoil the mood that's why she didn't say anything, however seeing the sangeet decor she isn't very optimistic about Devika's plan for the wedding.

Barkha taunts and tells Vanraj that this is a dance competition and not a competition to see who can sit jobless at home the longest.

Later Barkha's friends compliment Pakhi and invite her to join their kitty group which would go on an international trip the next month.

Pakhi's eyes glisten and she becomes very excited to join their group and roam abroad.

Meanwhile, Bhavesh and Kanta come over to Pakhi to remove the evil eye from her, however, Pakhi feels embarrassed by them.

Pakhi then calls Anu forth and asks her to take them away on the pretext of eating food.

Barkha's friends ask Pakhi who those people were and Pakhi responds by saying they were some random relatives and starts giggling.

Anupama and Kavya who watched this from afar get angry, however, Kavya calms down Anupama and tells her to speak to Pakhi after the event.

Anupama says if it was a mistake she would have waited, but since it isn't she will teach her in Pakhi's language.

She comes over to Pakhi and announces that those weren't any random relatives but Pakhi's grandmother and uncle.

Anupama leaves and Pakhi follows Anupama into a room where Pakhi asks Anupama why she embarrassed her.

Anupama asks why Pakhi was ashamed to introduce her own uncle and grandmother.

Pakhi says she felt embarrassed seeing their clothes and tells Anupama to inform them to wear better clothes at the wedding.

Anupama starts crying and Pakhi asks why Anupama is getting emotional as she didn't say anything to her.

Anupama says that Pakhi insulted her mother which hurt her deeply, which is a feeling Pakhi is unaware of.

Pakhi thanks Anupama sarcastically for ruining her mood even in her sangeet.

Anupama later remarks to Kavya that while good things are happening bad things could happen as well.

© Copyright tellybest.com, 2022, 2023. All Rights Reserved. Unauthorized use and/or duplication of any material from tellybest.com without written permission is strictly prohibited.
Cached Saved on: Monday 21st of November 2022 07:27:26 AMCached Disp on: Thursday 1st of December 2022 11:25:32 AM