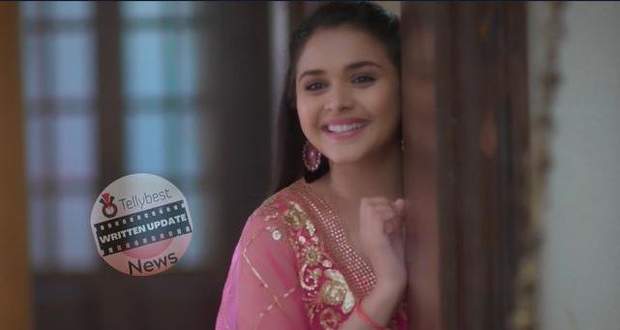 Today's Anupama 13th October 2022 episode starts with Leela being unable to figure out how to open a tap.

Barkha gets mad at Leela and asks her to hurry up.

She then calls Ankush and states her patience is being tested while Ankush laughs as he cannot believe that Barkha is staying with Leela.

Meanwhile, Pakhi asks Adhik to drive back since she panics after talking to Anupama.

Adhik gets mad and tells Pakhi he didn't go and meet his US friends because he wanted to spend time with her while Pakhi apologizes.

Everyone gets happy to see Ba change into Salwar-Kameez but Anupama notices Leela's upset face.

At Shah house, the men are already sleepy while Anuj tries to cheer them up to make the full-course meal.

Ankush complains about kneading the dough & Vanraj taunts him for not being a hard worker since he gets food to eat just like that.

Vanraj & Ankush come face to face and everyone gets worried.

Saying that Ankush's only motive to come to India was to take over Anuj's property, Vanraj tells Ankush to leave his house while Hasmukh intervenes.

On the other hand, Kinjal & Rakhi try to loosen up Leela who is hesitating to swim in the pool.

Just then, Barkha pipes in and say that sharing a room is new for her while Leela tells Anupama she is not going to spare Barkha jokingly.

Meanwhile, Hasmukh scolds Ankush and Vanraj for fighting and not being capable of making a single 'roti'.

Hasmukh then tells Vanraj he is going to upload Vanraj's childhood embarrassing photos while Anuj says Ankush's old photos will be uploaded too.

Unwillingly, Vanraj & Ankush patch up by shaking hands while Samar asks them to hug it out.

At the resort, all the ladies enjoy and jump into the pool, splashing water on each other.

Leela uses the tube to put it over her head and makes everyone laugh.

Meanwhile, Adhik & Pakhi arrive at a resort but she gets nervous when Adhik goes to book a room.

Adhik tells Pakhi that if she is not comfortable, they can go to a different place but Pakhi is just worried about Anupama or Vanraj knowing about her escape.

Anupama sees a couple walking together and she feels they resemble Pakhi & messages Vanraj to know whether Pakhi has reached her friend's place or not.

Adhik tries to cheer Pakhi up by calling her future "Mrs. Mehta" while she blushes.

Getting a bit closer to Pakhi, Adhik asks her to freshen up so he can order the pasta and they can hang out later.

© Copyright tellybest.com, 2022, 2023. All Rights Reserved. Unauthorized use and/or duplication of any material from tellybest.com without written permission is strictly prohibited.
Cached Saved on: Monday 21st of November 2022 09:24:16 AMCached Disp on: Friday 9th of December 2022 04:40:25 AM