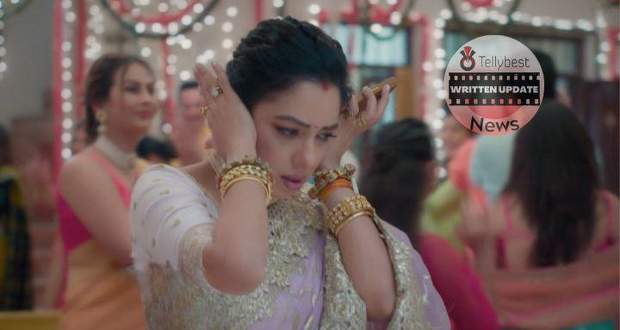 Today's Anupama 13th September 2022 episode starts with Anupama making Toshu hear the recording of the girl on his phone.

Toshu begins speaking up in broken sentences and tries to reason.

However, Anupama directly asks her who she is and what had Toshu done with her.

Paritosh begins explaining himself and says that Kinjal was on medication and having mood swings and he needed some break from all that.

Anupama looks at him in horror disgusted by her blood.

She makes him continue and asks more.

Toshu says that he began talking to this girl and had dinner.

Anupama asks him more while Toshu gets frustrated and tells her to understand herself.

Anupama says that she wants to hear it from him so she does not get anything wrong.

She keeps poking and calling out for Toshu to ask more and hear everything from him.

Toshu gets irritated and yells that next that happened which was supposed to.

Anupama begins getting a flashback of the time she came into the room dressed as a bride and Kavya, as a bride, was lying on her bed getting intimate with Vanraj.

Meanwhile, Anuj feels something is wrong and decides to check on Anupama however, Samar stops him and tells him to have a group-fi with Arya.

Later Leela feels that in the time Anupama and Toshu are lighting one lamp she will have the whole house lit up like Diwali.

Kavya says she will check on them however, Rakhi stops her anxiously which does not get unnoticed by Barkha, and tell Kavya that she should serve and Rakhi will check the duo.

On the other hand, Anupama is taunting Paritosh for his faults but Paritosh reasons he has not done any love or affair with her so he is not like Vanraj.

Anupama tells him he has gone 2 steps ahead of his father and this disgusts her.

Anupama tells that Toshu forgot all his responsibilities and only remembered that he is a man and a man has his needs.

She further asks how he would feel if Kinjal would have done the same with him and Toshu fumes in jealousy.

Toshu says that he either would have died or killed Kinjal for that because man and woman are different in every aspect.

Anupama gets shocked by his answers because Paritosh does not seem to be guilty at all about what he did.

He neither reprimands his actions nor his words which makes Anupama hate him.

Rakhi is anxious about the discussion between Paritosh and Anupama and is unable to march toward them out of fear.