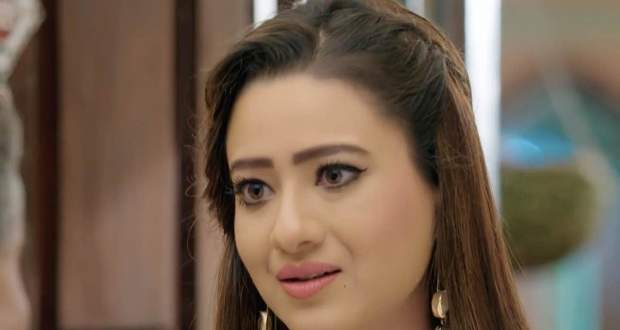 Today's Anupama 14 April 2021 episode starts with Mamaji bringing popcorn for Hasmukh while Kavya comes there and announces that Pakhi is not at home.

Meanwhile, Pakhi is enjoying at Kabir's party while Hasmukh checks her room and gets worried to not find her there.

Kabir's friend spills drink on Pakhi's dress and takes her to the bathroom where she is left alone with Kabir.

Elsewhere, Samar consoles Nandini and tells her that they are going to take their seven vows that day.

Hasmukh calls Kinjal and tells her everything after which she tells that she will inquire about Kabir from Kinjal's friend.

Kavya tries to sneak into Vanraj's room to steal divorce file but Mamajj comes there and stops her.

Samar vows to Nandini to always support her while Kabir makes Pakhi uncomfortable and she starts getting irked by his actions.

Kabir tries to kiss Pakhi while she slaps him hard and tells him that Anupama taught her to fight back before she gathers everyone.

Pakhi comes back home while Hasmukh confronts her and she tells him the truth.

She apologises while he says that she proved herself as Anupama's daughter.

Meanwhile, Vanraj asks Anupama how they will tell to Shah’s about their divorce. Anupama says they have to tell the family as divorce is within 2 days.