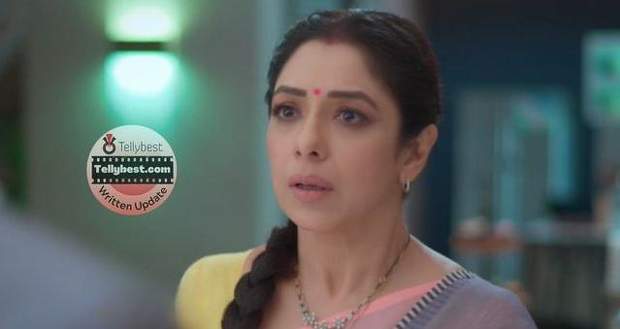 Today's Anupama 14th December 2022 episode starts with Anuj telling Anupama that he loves her so much and he doesn't want to change her.

However, he wants to make her understand that every time it is not the best to stand alone in the storm as everybody requires help at a given point in time in their lives.

Anupama's ears ring in a panicked mode as Anuj goes on speaking and finally addresses her as Mrs. Anupama Kapadia.

Saying that he won't meddle from now on with "her" kids, Anuj leaves in his room while Anupama breaks down.

It is the first time that MaAn has ever fought like this as sadness lingers inside both of their hearts.

Anuj speaks a Shayari internally, stating this hasn't happened before while the last bits are completed by Anupama.

Meanwhile, Pakhi grows frustrated and stress eats as glimpses of Dimpy laughing with Adhik replay freshly in her mind.

She worries about Adhik forgetting her but Adhik, instead, is wrapping a gift for Pakhi and thinking of taking her on a long drive.

On the other hand, Anupama goes to little Anu's room to apologize for not signing her picnic form on time.

Little Anu laughingly tells Anupama that she is not angry while an emotional Anupama hugs her and urges little Anu to scold her mother whenever she is in the wrong.

Anupama promises to take her on a picnic and little Anu gets excited and starts listing out the things she would pack.

Meanwhile, Anuj lies on his bed like a dejected soul and gets a knock on his door.

His heart lights up, thinking it is Anupama but it is Ankush who gives him an important work file.

Anuj receives it and hugs Ankush the next second, saying that he just needs a hug.

At night, Kavya sees an angsty Pakhi unable to sleep and sitting on a staircase.

Kavya arrives with a cup of hot coffee and advises Pakhi to take her relationship slow, just like cooking food should be done at a low flame.

Kavya urges Pakhi to become intelligent and not follow their examples and urges her to apologize to Adhik and get over the fight.

Pakhi smiles a little after Kavya presses a cogent kiss to her forehead and leaves.

Meanwhile, Anupama comes into Anuj's room and hugs him from the back.

Anuj turns around when he feels Anupama's tear fall on his cheek and she quickly latches onto him.

Anuj holds her head and tells Anupama that whenever someone hurts her, he feels like destroying the whole world with a hockey stick.

Hugging Anupama close, Anuj reminds her that it is time to draw a line of control in her relationship with the Shah Household as he would never stop her from going there but she cannot just bear the burden throughout the years.

Anuj chuckles through the tears and says he knows that he married Anupama who is a mother too and asks her to take time but lose a little control because he doesn't want her to forget herself while fixing others.

Anupama latches tightly to Anuj's shoulders who confesses that he loves her and needs her so much but he will wait for her to draw a boundary because it is needed.