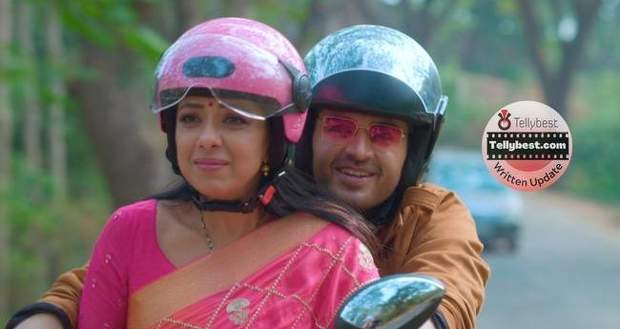 Today's Anupama 14th January 2023 episode starts with Anuj and Anupama walking on the ground together while Anuj drags a stick on the ground playfully.

Anuj says that he was wrong to stretch the fight so long unnecessarily when it would have ended with just a simple apology.

Anupama replies that she is also sorry for her fault and tells Anuj that she was careless in taking care of him.

Still, Anuj apologizes again as he got lost in his anger and did not see Anupama’s tears earlier.

Anupama asks Anuj to calm down and come with her so that they can talk out everything peacefully.

Meanwhile, Kavya asks herself to stop feeling guilty as she is doing all these things for herself.

Kavya realizes how she has been bound with responsibilities toward the family and carries guilt for that side of her personality.

However, Kavya cheers herself up and prepares herself to face the competition professionally if she wants to survive.

Kavya comes to Mohit and apologizes for Vanraj’s behavior, saying that Vanraj must have been under some pressure for which he behaved.

Mohit says that it’s okay and Kavya does not need to apologize on behalf of her husband but such a thing should not be repeated.

Further, Mohit tells Kavya that if she wants to advance in her career, then she has to leave her family behind.

At the same time, Vanraj searches for money everywhere in his room and collects a bit of cash which is clearly not sufficient for Jayanti Bhai.

Vanraj asks himself where he is standing in his life that he has to beg for money from his wife and cannot even manage a job for himself.

Hasmukh goes to the roof and finds Toshu there so that he can explain everything to him but Toshu asks Hasmukh not to start his lecture.

Hasmukh tells Toshu that they are already in the down stage of their life and Toshu’s deeds will finish their family completely.

On the other hand, Dimple comes to Samar and listens to his worries about not having Anupama with him.

Samar says that he feels a bit empty after Anupama left the Shah family as he was very attached to her.

As Samar asks Dimple not to take Leela’s words seriously, Dimple says that she always thinks about Samar’s words that he said that day while eating ice cream.

Samar leaves with Hasmukh’s tea after asking Dimple to come to a decision after she is done thinking.

Vanraj goes to a neighbor to ask for some money but they refuse to help him as neither he nor Toshu has a job.

Leela watches Vanraj begging for money and collects her jewelry so that she can help her son.

Meanwhile, Devika and Dheeraj wait for Anuj and Anupama and start munching on the noodles.

Anupama and Anuj reconcile with each other after apologizing for their mistakes and they promise to not let something like that ruin their relationship again.

Anuj says that they will just love each other from now on instead of trying to change each other.

As they are about to return to Dheeraj and Devika, Anuj gets a call from Jayanti Bhai who says that he has called to talk about Paritosh Shah.