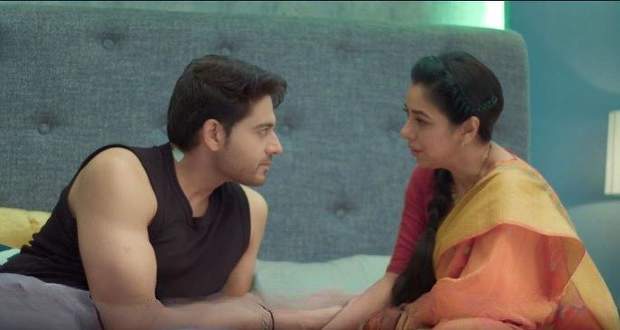 Today's Anupama 14th July 2022 episode starts with Vanraj worrying about the new member of the Kapadia family while Kavya tries to calm him about it.

Vanraj tells Kavya that Anuj has given everything to Anupama and her biggest weakness is that she is very emotional.

Kavya tells Vanraj that Anupama is not a fool and bids him good night.

However, Vanraj holds her hand and stops her to ask her about Anirudh.

Kavya firmly tells Vanraj that her business with Anirudh is purely business.

The next morning, Anuj and Anupama do the pooja and he leaves to bring Anu home while Barkha and Ankush look at them with confusion.

Meanwhile, at the Shah house, Vanraj suggests to Hasmukh that he does his surgery immediately but Hasmukh refuses saying that they should focus on Kinjal and her pregnancy first.

Elsewhere, Anu skips to Anuj with her luggage in her hand and runs to him calling him Papa and asking him about Anupama addressing her as Mummy.

Anuj happily tells Anu that Anupama is waiting for them at their home.

Back at the Kapadia house, Anupama is happily making cake and preparing for Anu's welcome while Barkha and Adhik speculate who this new family is.

Later, Anuj and Anu enter the Kapadia house and Anu runs to Anupama calling her mummy.

The remaining Kapadia family stands in shock as Anupama and Anuj do Anu's Pooja and do her welcoming rituals.

Afterward, Anupama and Anuj introduce Anu to the rest of the Kapadia family which gets mixed responses.

Sara runs to hug Anu while Barkha gets jealous seeing the attention that Anu is getting.

Adhik reminds her to not even bring it up in front of Anuj and Anupama and that it's a very touchy subject as Anuj was also an adopted kid.

Meanwhile, Anu sees the cake and asks Anupama if it's her only to which Anupama says that everything is only Anu's.

Barkha and Adhik look on in shock as others go towards them to celebrate.